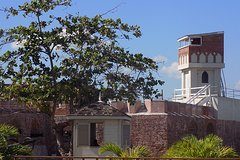 Leave Runaway Bay behind and see the UNESCO World Heritage panoramic Blue Mountains, visit historic city of Kingston member of the Creative Cities Network Organisation and Port Royal where you can tour a military fort built in the 17th century where pirates of the Caribbean once ruled!

Depart Ocho Rios for Kingston by private minivan with the tour escort. Upon arrival in Kingston our local guide will take you for a museum tour of Devon House the first mansion in Kingston which is 127 years old. Next, you will take a short drive to the former residence of Reggae legend, Bob Marley before heading to a typical restaurant for lunch.

In the afternoon you will visit the ruins of the ancient Port Royal City which was destroyed by a massive earth quake which sunk half of the city in 1692 into the Caribbean Sea.If time permits you will then head to the National Heroes Park or The National Gallery of Jamaica, which was established in 1974 and is the oldest and largest public art museum in the Anglophone Caribbean. It has a comprehensive collection of early, modern and contemporary art from Jamaica along with smaller Caribbean and international holdings. Then you will enjoy dinner and overnight stay at the hotel.

After a buffet breakfast, you will leave by private minivan to the Blue Mountains. Upon arrival at the Blue Mountains, you will go deep into the rainforest to the Holly-Well Nature Reserve Park for a 30-minute nature walk on one of its trail observing indigenous birds, butterflies and plants. An optional stop for photos along the way can be made at the New Castle military barracks which was established in 1841 by the British. Next, you will head to Creighton Blue Mountain Coffee Farm by private minivan for around 1 and a half hours. After lunch, we return to Ocho Rios by private minivan. Tour ends upon arrival at your hotel in Ocho Rios at about 5pm.Knutsford Court Hotel or similar