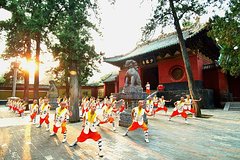 Your guide and driver will meet you in your hotel's lobby in Luoyang at 8:30am.

The tour begins at the Longmen Grottoes. Densely scattered along the cliffs on both banks of Yi River, Longmen Grottoes is one of the four great grottoes in China. The construction started from 493 AD of the Northern Wei Dynasty when Emperor Xiaowendi moved the capital to Luoyang and lasted for more than 400 years. Now there are 2,345 caves with 2,680 statues, over 70 stupas and 2,680 inscribed stone tablets.

Later, you will stop at a local restaurant for lunch.

After that, you will continue to explore the White Horse Temple.

The White Horse Temple, patronized in 68 CE by Emperor Ming in the Eastern Han Dynastys capital, is the first Buddhist temple to be built in China. Explore the halls and pavilions with your guide, hearing stories about the Buddhism history and culture.

Afterwards, you will be transferred back to your hotel in Luoyang.

You driver and tour guide will meet you at the hotel lobby at 8am and take you to visit the world famous Shaolin Temple. You will witness the real Kungfu performed by Shaolin monks. Explore the Shaolin Temple which was first constructed in 495 A.D. Later, Emperor Xiaowen of the Northern Wei Dynasty (386-557) had the temple built to accommodate the Indian master Batuo. As Chinese Kungfu also originated from Shaolin Temple, it has been recognized as the origin of Chan Buddhism and the cradle of Kungfu. Get you know the histories and related stories about Shaolin Temple - culture, people and soul.

Afterwards, you will explore the Pagoda Forest which is a concentration of tomb pagodas for eminent monks and abbots of the temple.

There are more than 240 tomb pagodas of various sizes from the Tang, Song, Jin, Yuan, Ming and Qing dynasties (618-1911), making it the biggest pagoda forest in China.

After your tour finished, you will be transferred back to your hotel in Luoyang.

Please note: This tour doesn't include the accommodation, please book at your own expense.