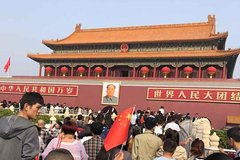 Beijing is offering 144 hour visa-free entry policy (53 nationalities) !  24 hour visa-free entry policy for all nationalities ! If you have more than 11 hours  layover time in Beijing , Don't  just stay in the airport, sitting on the cold chairs,playing video games or watching Game of Thrones. A better plan would be to visit the great wall,one of the world wonders that can be seen from out space, the wall was firstly built during seven kingdom period(7 centry BC ), and walk in the Forbidden City where only the Emperor and his concubines  lived in the past.  There you can appreciate the Ming and Qing Dynasties' rich culture and prosperity.

You will be picked up at the airport based on your given flight details. Our guide will hold your name sign in airport. Upon meeting on the spot, drive straight from Beijing Airport to the Great Wall at Mutianyu (1.5 hours drive)-the prettiest section in Beijing. After arrive at Mutianyu Great wall, you can hike up or take the cable car instead (pay extra), then enjoy hiking on the wall for 1-2 hours or so. Then drive to Tiananmen Square and Forbidden city ( 1.5 hours drive), then enjoy walking Tiananmen square and forbidden City for 2 hours or so, Then drive back to the airport. Lovely tour ends. The whole trip will last for 8 hours or so.

The Mutianyu section of the Great Wall is situated in Huairou District, about 70km from Beijing. As one of the most popular restored  great wall sections in Beijing, Mutianyu offers a relaxing journey to a higher point of the great wall by cable car service. The architecture of this section is in a special style that it has more watchtowers than any other section and was constructed with defensive battlements on both sides of the wall, rather than just facing to the north, as with most other sections.The Mutianyu Great Wall is surrounded mountains and has forest coverage of around 90%. As such, its year round scenery it enjoys the reputation of being one of the most beautiful areas of the Great Wall.

Tiananmen Square of The Gate of Heavenly Peace. It is situated in the centre of Beijing City. It is the original gate of the Imperial Palace (more commonly known as the Forbidden City). Thousands of people come to the Square everyday. It is the largest city square in the world, encompassing 44 hectares (108.7acres).

The Forbidden City was the Chinese Imperial palace from the mid-Ming Dynasty to the end of the Qing Dynasty. It is located in the middle of Beijing, China. It now houses the Palace Museum.

The complex consists of 800 buildings with 8,886 rooms. It covers 720,000 square metres. The Forbidden City was declared a World Heritage Site in 1987 as the "Imperial Palace of the Ming and Qing Dynasties",[1] and is listed by UNESCO as the largest collection of preserved ancient wooden structures in the world.

Note 1: Counting from your flight (international) lands at Beijing airport to meet us at the exit will take about 2 hours. It includes such procedures as follow:

3. Baggage claim (could be ignored by layover passengers);

Note : As Great Wall is on the mountain top, so in order to let you speed up to the wall and see Great Wall as much as possible, we suggest you to use cable car instead of 40mins walk each way through mountain path. Save time & energy.