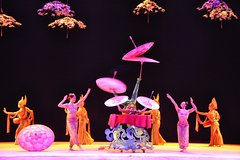 See the magnificent buildings within the Forbidden city compound to get a feeling of the grandeur architectural style, the impressive antiques from the Ming and Qing Dynasties, and uncover the secrets of the emperors and concubines in the Forbidden City. Walk on the largest city center square in the world--Tiananmen square, and visit one of the most beautiful imperial garden--the Summer Palace. Eat at the restaurant where the locals go. Then enjoy an amazing acrobatic show with VIP ticket.Tour includes tasty local lunch, all entrance fee, VIP acrobatic show ticket at the Chaoyang Theater, an English-speaking guide and transport by private vehicle.

Following a morning pickup from your accommodation in Beijing city center at 8:30am, meet your private guide and hop aboard your air-conditioned vehicle.

Your exploration begins with a visit to one of the worlds largest public areasTiananmen Square, home to the National Museum of China, the mausoleum of Mao Zedong and the great Monument to the People's Heroes. Passing through the south gate to the magnificent Forbidden City, a 250-acre complex of courtyards, palaces, pavilions and gardens, which served as the imperial palace for emperors and their households for more than 500 years.

The Forbidden City was the imperial palace from the Ming and Qing Dynasties. It is located in the middle of Beijing, and now houses the Palace Museum. For almost 500 years, it served as the home of emperors and their households, as well as the ceremonial and political center of Chinese government. The Forbidden City was declared as a World Heritage Site in 1987, and is listed by UNESCO as the largest collection of preserved ancient wooden structures in the world.

Enjoy your delicious lunch at an authentic restaurant.

Then you will pass by the National Stadium for photos and arrive at the Chaoyang Theater. Enjoy the amazing acrobatic show with the VIP seat and marvel at the fascinating flexibility of the gymnasts and acrobats.

Return back to your vehicle, and ride back to the hotel after the tour. Arrive at your hotel around 7:00 p.m.