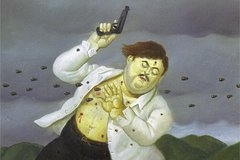 Learn about the life and death of Pablo Escobar, one of Medellín's most famous figures and Colombia's most notorious drug lord. This 4-hour historical tour takes you back in time and inside the life of Pablo Escobar, a man both loved and feared by millions of people. Learn about his extensive cocaine operation and visit three historical sites: the Monaco Building, the house where Escobar was killed and his final resting place. This building was demolished on March 2019 and now is being replaced by a memorial park for his victims. Here, you will start to learn his story and understand why he was the most feared man in Colombia; loved and hated by many

Pablo Escobar is probably one of the most famous characters in recent Colombian history. It is probable that if you decided to come to Colombia, youve seen the thrilling Netflix series Narcos. Most of what you watched there is true, however, if you are intrigued by the real and non-Hollywood story, youll surely enjoy learning while in the context in which the story took place with this tour.

Youll be picked up at your hotel at 10:00 am to take the route to the truth. During this whole tour, you will learn about the strategies Escobar used to gain power, and how this led him to fight two wars: One against the government and the other against the Cali Cartel. Throughout the tour, you will also hear the tour guides anecdotes of that time.

Your first stop will be at the place where Escobar lived: Edificio Mónaco. This building was demolished on March 2019 and now is being replaced by a memorial park for his victims. Here, you will start to learn his story and understand why he was the most feared man in Colombia; loved and hated by many. Most importantly, you will learn how, for more than a decade, he shook the country to its very core.

Before going to the cemetery where he was buried, you will pass through La Gruta, to see a Virgin Mary Statue commonly known as La Virgen de Los Sicarios (the Virgin of the Assasins.) This virgin was very popular amongst hired assassins who pray to her to bless their bullets, guns, and murders. Once you arrive at the cemetery, you will hear about the duality between the hero and villain, and about the legacy he left. Then, you will go to downtown Medellin and walk Parque San Antonio, where you will see a Boteros sculpture called Pajaro de Paz (Bird of Peace) made with the remains of a previous sculpture that was blown up by the FARC in 1995 killing 23 people. Even though this was not a terrorist attack by Pablo Escobar, it is the kind of terror he spread and taught to others. You will still see the remainings of the first sculpture to remind people what happened that day and commemorate the victims. You will experience how art and urbanism are put together to support collective memory and stimulate optimism and progress.

To conclude this tour, you will go to Comuna 13 a slum that once was the most dangerous neighborhood in Medellín. It was a strategic corridor for drug-lords in the 80s so it was an area full of conflict and violence. Here, you will be able to see how much this community has evolved through social and urban innovation, giving them hope, a new chance in life, and so much more. One of the greatest examples of this is the famous outdoor escalators that were built back in 2011 to connect the community. The 30 minutes climb was reduced to a 5 minutes ride improving the life quality for the inhabitants. Thanks to this, the complicated social dynamics of what once was another slum, gradually turned into a brighter panorama.

The electric escalator will take you up to a platform from where you will get another stunning view of Medellín from above. Taking a closer look, youll notice amazing street art everywhere: colorfully painted roofs and drawings on the walls, from talented street artists who have sealed with paint and spays the violent past of the comuna. As soon as you finish the tour, you will be taken back to your hotel so you can enjoy the rest of your stay in the marvelous City of Eternal Spring.