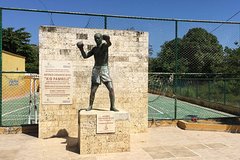 Visit to the first free town of america; Village founded by African slaves who escaped from their owners in 1603 and who in 1713 received independence and / or freedom from the Spanish crown. This population was declared an oral and intangible heritage of humanity by UNESCO in 2005, thanks to the fact that they still retain their African roots such as their Palenquera language, their religious rites, their traditional music and dance medicine. On the guided tour you will visit the houses of the most representative people of the population where you can interact with them while listening to the live history of this population. This tour will end enjoying the delights of the Palenquera gastronomy.

In the main square of the population of Palenque is the monument to the hero Benkos Bioho. We will visit the monument, we will talk about the history of Benkos and the church in Palenque.