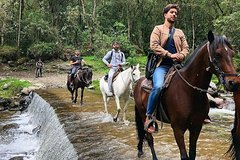 In this ride you can take full advantage of the landscapes of the cocora valley, as it passes through different ecosystems, including the beginning of the Cloud Forest, Crossing the Quindio River, Territory of the wax palm, sightings from the viewpoints.

This tour allows you to take a tour walking through the mountains of the Cocora Valley with a guide that will give an explanation of the natural, traditional, and social environment.

The majority of species that are seen are birds and this can be long until you see the condor of the Colombian Andes or the yellow-eared parrot.

This is one of the most re-written ones in the entire cocora valley since it has a quite varied amount of ecosystems, starting from the urban center of the cocora valley it goes by uncovered road "on land" until it reaches a seeding plate through which the Cardenas creek also known at this point as the Quindio river passes, then it continues to leave a small forest to begin entering the territory of the palms through a traditional hut that will begin to climb through the mountains, when we are gaining height with the horses we can gradually see the best landscapes of the cocora valley reaching what is known today as the viewpoint of the cumin, which has a privileged view of approximately some 360 degrees. allowing the widest and most beautiful view in the entire cocora valley, this viewpoint reveals the entire wax palm ecosystem, the tradition in livestock farms, the passage of the rivers that pass to the mountain legs, the highest hill "MORROGACHO" and has the possibility to see the condor of the Colombian Andes, this route is recommended for every family