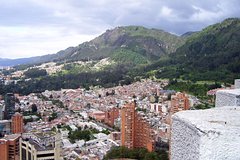 In this walking tour of traditional Bogotá you'll be transported from colonial times to the 21st century. It's a route designed to put you in touch with the cultural life of this city that has grown from a small village up in the mountains to a multicultural hotspot.

You'll walk in the footsteps of Gabriel García Márquez, the Nobel literature prize recipient, and you'll get a glimpse of the places that have made Bogotá a cultural capital. If you like, you can stop at traditional cafes and delis along the way, or at the local market, where you'll see the mix of races that constitute the Colombian people. You'll also have the chance to buy some gifts to take back home.

The tour is ready whenever you are and the audio plays automatically at exactly the right time and place using your smartphone's GPS and the VoiceMap mobile app, which also works offline.

Academia Colombiana de la Lengua is the official academy for the Spanish language in Colombia. It was the first academy founded outside Spain and dates from 1871. The founders were Rufino Jose Cuervo and Miguel Antonio Caro, two prominent linguists.

The Plazoleta del Rosario is named after the Colegio Mayor del Rosario. This college dates from 1653 and is a very important university in Colombia.

The Iglesia de San Francisco is held by the Franciscan Order. Its one of the oldest in the city. The construction dates from 1595. You can see the beautiful altar and splendorous works of religious art around the interior.