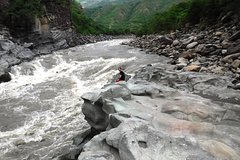 Immerse yourself in the unique beauty of the "Chicamocha Canyon, the second largest in the world. Enjoy the stunning sounds and the incredible view that nature has for you, its endemic birds singing and revoking as you walk along the royal road to Jordan, built by the Guaneño Indians over 500 years ago and their howler monkeys who feel alive in the distance while keeping the Canyon awake.
When you reach the Chicamocha River, you can relax in "Shangri-La", the walkers' refuge with its natural pool and dozens of brightly colored hammocks that call you to rest. Then, upon reaching the smallest town in Colombia, Jordan Santander; With only 60 inhabitants, you will see Colombia's first toll while letting the locals themselves tell you the story of Jordan.

Our guides will accompany tourists from the Barichara park or agreed point to Jordan, the town that remains in the Bottom of the Chicamocha Canyon. Along the way you can see a large part of the Chicamocha canyon, which is the second longest in the world.

During the descent to Jordan, tourists will be able to see: "La Mesa de los Santos". It is a plateau located in the Eastern Cordillera of Colombia in the Massif of Santander. This mountain, very frequented by climbers, hikers, walkers, tourists and inhabitants of the region.

The Chicamocha River is one of the most important rivers in central-eastern Colombia. It originates in the municipality of Tunja in the department of Boyacá, where it later forms the Chicamocha canyon, enters the department of Santander and joins the Suárez river and the tributary of the latter the Fonce river to finally form the Sogamoso river. In Guane language it means silver thread (girl) on full moon night (mocha).

Tourists will be guided to Jordan. It is a municipality of Colombia, located in the department of Santander 80 km from Bucaramanga. It is located in the Chicamocha River Canyon (Chicamocha Canyon), exactly on the south bank of the river. The municipality has the least populated urban center in Colombia with only 54 people living in this town