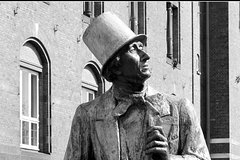 Walk through Copenhagen in the footsteps of world famous author Hans Christian Andersen - you know: The ugly duckling, Little Mermaid, the Tinderbox, the Nigtingale etc...

The first part of the tour follows the path he took on his very first day in the city, arriving from his hometown of Odense, only 14 years of age in 1819.

You'll get the story of the strangest boy in town and how he made his way from rags to riches in a society, where social mobility was almost non-existant.

Part two gives you the story of his fight to make it in the big city, how he tried his luck as an actor, dancer and singer, before finally cashing in on his ability to befriend the right people - and be sent back to school.

The final part of the tour concentrates on his first years as a struggling author and how the first of his famous fairytales came to life.

On this tour you will also get the story of Copenhagen's transformation from the dirtiest capitol in Europe to ... well, something a little better.

We'll pass the busiest pedestrian street in the city - and one of the longest in the world - and end the tour close to it, if you want to do a bit of shopping later.

We'll pass the palace that houses the danish parliament, the royal stables and the old court theatre, where Andersen pusued his ambitions.

Al through Andersen's more than 50 years as a copenhagener, he always lived asclose as possible to his beloved Royal Theatre. So it's only fitting that we end the tour here.