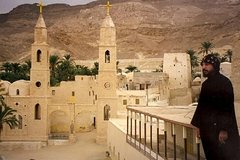 The monasteries of St. Anthony and St. Paul are the oldest Christian monasteries; they both date back to the 4th century AD, when monks began to settle at the foot of the Red Sea mountain of Galala Al-Qibliya, in hidden cliffs and caves. Both monasteries are considered as the holiest sites of the Coptic Church in Egypt. Located off the Zafarana Road leading to Beni Suef, some 70 km south from Ain Sukhna, and enjoyJefton Island,The most famous trip as it has a lot of fun and recreation in the Red Sea,You will enjoy watching the natural sceneries where a lot of sea creatures are living there.

Itinerary
Day 1 Arrive in hurghada , visit St Anthony and St Paul Monasteries in the Red Sea
A guide will be waiting for you out side hurghada airport with our sign in the morning then he will take you to go to your hotel in Hurghada for accommodation and having your lunch then he will take you around 1.30 pm to start your Coptic tour , you will start your tour by visiting the
The Monastery of Saint Anthony
is a Coptic Orthodox monastery standing in an oasis in the Eastern Desert of Egypt. Hidden deep in the Red Sea Mountains. It is the oldest monastery in the world. St Anthony himself was the founder of monasticism
The Church of St Anthony is the oldest part of the monastery and the main highlight of a visit here. Its built over the saints tomb and contains one of Egypts most significant collections of Coptic wall paintings , which demonstrate how medieval Coptic art was connected to the arts of the wider Byzantine and Islamic eastern Mediterranean
The Monastery of Saint Anthony was established by the followers of Saint Anthony, who is the first Christian monk. The Monastery of St. Anthony is one of the most prominent monasteries in Egypt and has strongly influenced the formation of several Coptic institutions, and has promoted monasticism in general. Several patriarchs have come from the monastery, and several hundred pilgrims visit it each day

Most of the monks who guide tours will take you up onto a section of the monasterys fortified walls for a short walk to see the large basket and wooden winch that were the only means of getting into the complex in times of attack
You also get an excellent panorama over the monks impressive cultivated gardens
Then head to The Monastery of St. Paul the Anchorite
probably dates to the fifth century and was founded in memory of one of Egypts greatest saints and anchorites, who is said to have lived in a cave over which it was built for a period of some eighty years. We mostly know of his life from the writings of St. Jerome and his work, Vita Pauli (Life of Paul). St. Jerome tell us that, while it may have been St. Anthony who founded the monastic way of life by inspiring others, Amathas and Macarius, who were disciples of Anthony, affirm that Paul of Thebes was actually the originator of the practice

St. Paul seeked refuge in the wilderness of Egypts Eastern Desert, where he is said to have lived until the age of one hundred and thirteen. Living in his cave, and clothed in a tunic made of plaited palm leaves, tradition holds that a raven brought a half of a loaf of bread which day for him to eat

The Monastery of St. Paul (Deir Anba Bula), which has also been called the Monastery of the Tigers (Deir al-Numur), perhaps because of its wilderness location, has always been associated with the Monastery of St. Anthony, usually in a subordinate manner. The first travel narrative we have of the monastery was provided by Antoninus Martyr, a native of Placentia who visited the tomb of St. Paul between the years 560 and 570 AD. The first monks to occupy the monastery may have been Melchite, but they were followed by Egyptian and Syrian monks. The Syrians may have had a sustained existence at the monastery, for it appears that they also occupied the monastery during the first half of the fifteenth century, after which their presence disappears. It should also be noted that, according to an isolated Ethiopian reference, the seventieth patriarch of the Coptic Church, Gabriel II (1131-45 AD) was banished to the monastery for three years
After finishing your tour you will be transferred to your hotel in Hurghada.

Day 2check out from the hotel and visit jiftun island
in the morning you will check out from your hotel after having your breakfast and leave your bags in the reception hall
then You will go with the company agent by a conditioned car to the port at 8 a.m then to the Island of Jiftun Is the first natural reserve in the Red Sea with its attractive white sandy beach,This will take about an hour and a half in the island,After that we will leave to the middle of the sea At this time, the crew will prepare the lunch meal which you will have on the deck of the boat,We will stop two times for swimming and snorkeling in two different areas.after that you will return to your hotel to take your bags then you will be transfer to hurghada airport