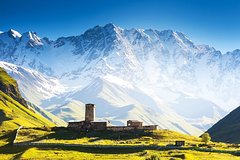 Breathtakingly wild and mysterious, Svaneti is an ancient land locked in the Caucasus, so remote that it was never tamed by any ruler. Uniquely picturesque villages and snow-covered, 4000m-plus peaks rising above flower-strewn alpine meadows provide a superb backdrop to the many walking trails. Svanetis emblem is the tower (defensive stone tower), designed to house villagers at times of invasion and local strife. Around 175 towers, most originally built between the 9th and 13th centuries, survive here today.

Program
Day 1
Departure from the hotel.
Enguri hydroelectric power station.
Stop for lunch.
Way to Hatsvali (if the cable car doesnt work the trip to the viewpoints near the villages of Mulakhi and Ipari).
Check in hotel .
Visit to the Svan Koshki(tower) and an old Svan house.
Svan dinner.
Night Mestia (free time).

Day 2
Breakfast in the hotel.
Trip to Ushguli.
Breathtaking views of Shkhara and Ushba
Visiting Towers of Queen Tamar and Love
Departure back to Batumi.

Stop At: Inguri Dam, Jvari Georgia
Enguri Dam is one of the most beautiful reservoirs in the world. The Enguri Hydroelectric Power Station is the largest hydroelectric power station in the Caucasus on the Enguri River.
Duration: 20 minutes

Stop At: Mestia, Mestia, Upper Svaneti, Samegrelo-Zemo Svaneti Region
Mestia is the central town of Upper (Zemo) Svaneti.At 1,500 meters above sea level, the city is the starting point for many trips throughout the region.

There you will see a lot of Svan towers, which are a symbol of Svaneti. Nowhere else in the world is there even an analogue to these unique defensive structures of the early Middle Ages. Historically, the appearance of towers explains the fact of protection from the enemy and the natural elements. Therefore, a tower was built near each house, which served as a refuge for families in case of war. Another function of the Svan towers is the announcer. They were used as guard posts. As danger approached, a fire was lit on the main tower. As soon as this flame was noticed on a nearby tower, a flame also ignited on it. This process was repeated at other posts and, in a few minutes, the entire gorge was ready for military action.
Night Mestia
Duration: 1 hour

Stop At: Zuruldi Mountain, Georgia
Mount Zuruldi is home to the highest restaurant and hotel in Svaneti, and offers breathtaking views of Mount Tetnuldi and the Caucasus Mountains range.
Duration: 30 minutes

Stop At: Ushguli, Ushguli, Samegrelo-Zemo Svaneti Region
Ushguli, located only two to three hours drive from Mestia, is considered the highest settlement in Europe at the elevation of 2,200-meters above the sea level. This UNESCO World Heritage site is laid out at the foot of Mount Shkhara and offers gorgeous views of snow peak mountains, medieval defense towers, and green slopes. You will visit the tower of Love and the tower of queen Tamar. If enough time, we will visit Lamaria Church
Duration: 2 hours