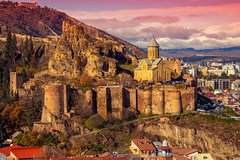 3 days to explore 2 capitals of Georgia. Ancient and Modern. Full of diversities and end authenticity.

cathedral in the world and one of the largest religious buildings

in the world by total area. Sameba is a synthesis of traditional

stages in history and has some Byzantine undertones.

The construction of the church was proclaimed as a "symbol of

Stop At: Rike Park, The left bank of the Mtkvari River, Tbilisi Georgia
Rike park is considered to be the youngest recreational area in Tbilisi. It is situated on the left

international visitors, especially families, and in summer. The Rike park is quite easy to find,

as its main entrance is right from the beautiful pedestrian Bridge of Peace. The park is a host

to a numerous entertainment facilities like singing and dancing fountains, artificial climbing

wall, childrens maze, mega-chess board, as well as footpaths and quiet corners. The start

Rike park, as well as a number of fancy bars and restaurants.

Stop At: Narikala Fortress, Tbilisi Georgia
By rope way visiting Narikala. The fortress was established in the 4th century, around the period when the city itself was founded. It was then known as Shuris-tsikhe (Invidious Fort). The name

Narikala is said to derive from a Persian word for citadel,

but another theory says was the name that Mongols

considerably by the Arabs during the 7th and 8th

centuries. The Arabs built the Emirs palace within its

fortress in th 11th century. Most of the existing

fortifications date from the 16th and 17th centuries. In

1827 it was damaged by an earthquake and was not

Stop At: Abanotubani, Abano St, Tbilisi Georgia
The Abanotubani is the name given to the district in the Old Town

bathhouses that use the sulphurous waters of the many hot springs

Abanotubani is the place, where according to legend, King Vakhtang

Gorgasalis falcon fell, leading to the discovery of the hot springs and,

subsequently the founding of a new capital.

The bathhouses are located below ground level with only beehive

Stop At: Dzveli Tbilisi Sulphur Waterfall, Botanikuri st 1, Tbilisi 0105 Georgia
Leghvtakhevi is translated like Fig Gorge in Georgian. It is

accessible only from within the Botanic Garden, this beautiful

waterfall and watering hole for locals is now reachable

through a series of paths and bridges behind the baths.

A popular location to relax and stroll about especially at night

or during hot weekend days, make sure to check out this

Stop At: The Bridge of Peace, Tbilisi Georgia
It is a pedestrian glass and steel bridge in a bow-shaped design that sits over the Mtkvari (Kura) river in Georgian capital. It was officially opened in May 2010. The bridge was brought to Georgia from Italy in 200 unassembled components. The bridge is 156 meters long and has more than 10 000 LED bulbs built-in, that are switched on daily 90 minutes before the sunset. The pulsating lights are communicating the message in Morse code; the message says chemical elements from the Mendeleevs periodic table that make up a human body. The idea of the Italian designer Michele De Lucchi was to broadcast the message which is the anthem of life and Piece among people and nations. The Bridge of Peace is a convenient cross Point between the Rike Park and the old part of the town. It also provides amazing views of Tbilisi, especially at sunrise, sunset or night.In 2012 the Bridge of Piece in Tbilisi hit the Top-13 most unusual bridges in the world.

Stop At: Rezo Gabriadze Marionette Theater, Shavteli St., 26, Tbilisi 0105 Georgia
In 2010 Rezo Gabriadze built a unique clock tower next to the marionette theatre in Tbilisi old town. Every hour an angel comes out to ring the bell with a small hammer.

There is a small mechanical puppet theatre inside the tower and twice a day at noon and at 7pm you can see the show  The Circle of Life.

Tower is decorated with hundreds of tiles which he designed himself and it instantly became a major architectural attraction of Tbilisi.

Stop At: Jvari Church, Mtskheta Georgia
The VI century Georgian Orthodox monastery is built on a hill opposite Mtskheta,

at the confluence of Aragvi and Mtkvari rivers. Shortly after the adoption of Christianity,

King Mirian III erected an enormous wooden cross on this site. In the 2nd half of the

VI century Guaram, the ruler of Kartli, built a small church beside the Holy Cross.

The church is included on the UNESCO World Heritage Site list.

Stop At: The City-Museum Reserve of Mtskheta, Mtskheta Georgia
Mtskheta was the ancient capital of the Eastern Georgian Kingdom from the

III Century BC to Fifth Century AD. It was also the location where Christianity was

headquarters of the Georgian Orthodox Church. The city is very small and is just a

20 minute drive from the capital of Tbilisi. Here you will find a ticket to the 5th

century BC and travel all the way through to mid-antiquity.

architecture. It was the main pilgrimage place on the Silk Road, the burial place of the

Christs Robe, the tomb place of Georgian Kings and the most frequently visited place in

Georgia.  It is listed as UNESCO World Heritage Site and is located in the historical town of

Mtskheta, the former capital of the kingdom of Iberia

Stop At: Samtavro Church, Davit Aghmashenebelis qucha, Mtskheta 383400 Georgia
Samtavro Convent is located in the spiritual center of Georgia, Mtskheta, and is considered

the famous landmark of the town. The monastery was built by King Mirian near the

blackberry, after the death of St. Nino.

King Mirian and his queen Nana were buried in Samtavro, which eventually became the

Meals included:
• Breakfast: at hotel
No accommodation included on this day.