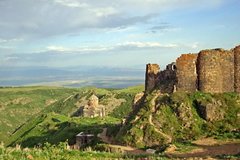 Visit Armenias ease from Tbilisi on this 3-days

guided tour. Depart from Tbilisi a private vehicle with a driver and make your way into Armenia. stop at: on the way at Lake Sevan kecharis noratus Echmiacin Kvor virap Noravank Gyumri Dilijan before continuing to the capital city of Yerevan. Travel to Garni Temple, Geghard Monastery, and Haghpat Monastery. Enjoy a tasting of local brandies in Yerevan.

1 day stop at : Sanahin Monastery is an Armenian monastery founded in the 10th century in the Lori Province of Armenia

.Duration: 30min stop at : monastery haghpat complex, the Cathedral of Surb Nishan, probably begun in 976, was completed in 991 by king Smbat. Duration:30 min

Between 1887 and 1889 the French archaeologist Jacques de Morgan discovered 576 rectangular stone sepulchers, along with cultural items made of clay, bronze and iron near Akhtala dating back to the 8th century BC.[3][5] and Iron Age foundations

Duration: 30 min STOP AT GYUMRI CITY Duration: 2hour STOP AT ;MonasteryEreyuk Yererouk dates back to the 4th and 5th centuries. It is located in the Shirak canton of the Ayrarat province of Ancient Armenia.Duration:30 min stop at :The fortress was built on top of a hill, and the full fortification took a decade after the first stones were laid in 1834. The fortress is a 360-degree round structure made of black stone, from which it gets its name. After Russia's loss in the Crimean War, Sev Berd was upgraded and designated a "first-class" fortress.Duration:30 min stop at :Dashtadem Fortress ( is a substantial fortress of the 10th to 19th centuries located at the southern outskirts of Dashtadem village in the Aragatsotn Duration: 30 min STOP AT; Horomos was founded by a group of Armenian monks around 931-36, during the reign of King Abas I Bagratuni (r. ca. 929-953).[2] The monastic complex was enlarged over time and came to include the individual churches of Sts. John, Minas, and George, a series of large halls (gavits), a triumphal arch, and various smaller chapels and mausolea. Duration: 30 min

2 day STOP AT;The change of the status of Dilijan State Reserve to Dilijan National Park was conditioned by several objective reasons, such as inevitability of commercial activity in the area, presence of numerous settlements, including Dilijan town with its mineral water resorts, Yerevan-Ijevan railway line passing through its whole territory and others. Duration: 2hour STOP AT;Lake Parz is a small lake located in the Dilijan National Park east of Dilijan in Armenia. The lake was formed by natural climatic changes.Duration: 30 min STOP AT ;Haghartsin is a 13th-century monastery located near the town of Dilijan Duration: 30 min STOP AT ; Goshavank meaning "Monastery of Gosh"; previously known as Nor Getik) is a 12th- or 13th-century Armenian monastery located in the village of Gosh in the Tavush Province of Armenia. Duration: 30 min STOP AT ;Sevanavank Sevan Monastery) is a monastic complex located on a peninsula at the northwestern shore of Lake Sevan in the Gegharkunik Province of Armenia, not far from the town of Sevan Duration: 30 min STOP AT; LAKE SEVAN Duration: 2 hour STOP AT; HOVANAVANK The oldest part of the monastery is the single nave basilica of St. Karapet (i.e. Holy Forerunner, John the Baptist) that was founded at the beginning of the fourth century by St. Gregory the Enlightener, who baptized Armenia into the worlds first Christian nation. Duration: 30min

After visiting Mother Armenia Statue We proceed to Republic Visit

Erebuni Museum Visit COGNAC FACTORY Duration: 1hour STOP AT; GARNI GEGARD St. Geghard symbolizes the lance with which the Roman centurion pierced Jesus after crusifixion. Later the lance had been brought to Armenia and kept in Geghard Monastery for 5 centuries. The structure was probably built by king Tiridates I in the first century AD as a temple to the sun god Mihr. After Armenia's conversion to Christianity in the early fourth century, it was converted into a royal summer house of Khosrovidukht, the sister of Tiridates III. .Duration: 1 hour

stop at :Basaltic Organ Duration: 30min STOP ; AT top at:Visit to the Khor Virap Monastery - from here a beautiful view of Mount Ararat opens Duration: 30min stop at:Visit to Areni winery , tour inside the factory and wine tasting stop at:(Bird) Cave, Areni, Vayots Dzor Province ancient cave where 5500 years old shoe has been found Duration: 1hour stop at :Noravank Monastery Noravank is a 13th-century Armenian Duration: 40min stop at :Echmiadzin MonasteryJesus Christ descended from heaven and indicated the spot for a church to be built. Echmiadzin is the residence of the Supreme Catholicos of all Armenians and the center of the Armenian Apostolic Church. Duration: 40min STOP AT ZVARTNOTS the magnificent Zvartnots Temple was constructed in the 7th century. All these churches Duration: 30min

STOP AT ;OSHAKAN During the Arsacid Dynasty of the Kingdom of Armenia, it served as the main town of Ayrarat province and the capital of its Aragatsotn canton from which the Amatuni noble family ruled. However, Oshakan is best known for the Saint Mesrop Mashtots Cathedral which is the burial place of Saint Mesrop Mashtots, the creator of the Armenian alphabet. Duration: 40min STOP AT ; Kecharis Monastery is a medieval Armenian monastic complex dating back to the 11th to 13th centuries, located 60 km from Yerevan, in the ski resort town of Tsakhkadzor in Armenia. Nestled in the Pambak mountains, Kecharis was founded by a Pahlavuni prince in the 11th century, and construction continued until the middle of the 13th century. Duration: 30min stop at : is first mentioned as a settlement in the Middle Ages, when it was a much larger settlement. The bronze-age megalithic fort near the village points to the notion that Noratus is one of the most ancient continuously inhabited settlements in Armenia Duration: 40min

STOP AT ;The first church appeared here in the 6th century. In the 8th century it was reconstructed by Hovhannes III Odznetsi who served as the katholikos between 717 and 728 and was, as his name suggests, from Odzun. Duration30 min BACK TO TBILISI