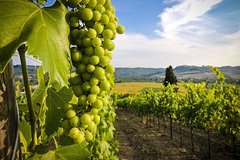 Start From Yerevan Georgia country situated at the meeting point of Europe and Asia, and this tour takes in the of both. Explore the capital cities of Tbilisi and ; Discover historic sites and scenery in Mtskheta, Bodbe, and Sighnaghi focus on exploring a UNESCO-listed city, strolling a historic monastery, and taking in Georgias City of Love.

Stop At: Tunnel Winery Khareba's, Meurneoba District Kakheti, Kvareli 383320 Georgia
The complex was founded in the 6th century by David (St. David Garejeli), one of the thirteen Assyrian monks who arrived in the country at the same timeThe monastery saw further development under the guidance of the 9th-century Georgian saint Ilarion. The convent was particularly patronized by the Georgian royal and noble families. The 12th-century Georgian king Demetre I, the author of the famous Georgian hymn Thou Art a Vineyard, even chose David Gareja as a place of his confinement after he abdicated the throne. Duration:1hour stop at : Wine tasting at Okro's winery, boutique wine producer that produces only 100% natural wines, with very limited production and export to Italy, France, Spain, UK, Japan, Australia and USA. You will have the chance to enjoy 3 types of natural wines and Chacha (Georgian grape vodka, like Italian grappa). • Lunch accompanying with home made wines in authentic family wine cellar in Velistsikhe Duration:1hour
Duration: 2 hours

Stop At: Sighnaghi Ethnographic Park, Signagi, Kakheti Region Duration:30min Stop At: Tunnel Winery Khareba's, Kvareli, Duration:1hour Kakheti Region What's special here is the 7.7km of wine tunnels, dug out of a hillside in the early 1960s for storing and ageing wine at constant temperatures. Today the tunnels store over 25,000 bottles of the Khareba company's European and qvevri wines. Tours go into part of the tunnels (where tastings also take place) then up to the viewing tower and restaurant.

Taste some of the best wines in Georgia during this private visit to the Kakheti wine region from Tbilisi. Learn about the traditional Georgian way of making wines in clay vessels through visits and tastings at several wineries. As of the 1770 census, Signagi was settled by 100 families, chiefly craftsmen and merchants. When Georgia was annexed by Imperial Russia in 1801, Signagi (Signakh) was officially granted town status and became a centre of Signakh uyezd (Russian: Сигнахский уезд) within Tiflis Governorate in 1802. In 1812, Signak joined the rebellion with the rest of Kakheti against the Russian rule. During the Caucasian War, the town "was considered an important point on account of its

Stop At: Signagi Municipality Administration, დავით აღმაშენებლის მოედანი N2, სიღნაღი, Georgia
The first archaeological findings from Telavi date back to the Bronze Age. One of the earliest surviving accounts of Telavi is from the 2nd century AD, by Greek geographer Claudius Ptolemaeus, who mentions the name Teleda (a reference to Telavi). Telavi began to transform into a fairly important and large political and administrative center in the 8th century. Interesting information on Telavi is provided in the records by an Arab geographer, Al-Muqaddasi of the 10th century, who mentions Telavi along with such important cities of that time's Caucasus as Tbilisi, Shamkhor, Ganja, Shemakha and Shirvan. Speaking about the population of Telavi, Al-Muqaddasi points out that for the most part it consisted of Christians. Duration:2hour
Duration: 2 hours