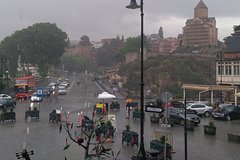 We take care of you.

Relax and Fill in Energy

Day 1: Transfer from Airport to the Hotel

No meals included on this day.
Accommodation included: Overnight in Tbilisi (3* Hotel)

Stop At: Mtskheta Church of the Holy Cross, Mtskheta Georgia
>>Jvari Monastery - a sixth century Georgian Orthodox monastery near Mtskheta, with the eye-catching view on the city and Aragvi-Mtkvari meeting place.

>>Mtskheta - was founded in the 5th century BC. It was capital of the early Georgian Kingdom of Iberia from the 3rd century BC to the 5th century AD then capital moved to Tbilisi, but it stayed as the coronation and burial place for most kings of Georgia.

>>Svetitskhoveli Cathedral - a masterpiece of the Early Middle Ages, it is recognized by UNESCO as a World Heritage Site, Christs robe is believed to lie beneath here.

>>Boat Trip on Mtkvari river, you can enjoy picturesque views of the city with glass of wine.

Day 3: Transfer from Hotel to the Airport