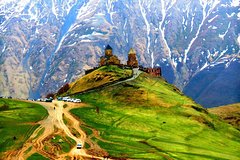 this is an amaizing tour where you can see beutiful nature old castels and churches, hydroelectric dams mountins.

In 1739, Ananuri was attacked by forces from a rival duchy, commanded by Shanshe of Ksani and was set on fire. The Aragvi clan was massacred. However, four years later, the local peasants revolted against rule by the Shamshe, killing the usurpers and inviting King Teimuraz II to rule directly over them. However, in 1746, King Teimuraz was forced to suppress another peasant uprising, with the help of King Erekle II of Kakheti. The fortress remained in use until the beginning of the 19th century. In 2007, the complex has been on the tentative list for inclusion into the UNESCO World Heritage Site program.[1]

Gergeti Trinity Church is a popular name for Holy Trinity Church near the village of Gergeti in Georgia. The church is situated on the right bank of the river Chkheri (the left tributary of the river Terek), at an elevation of 2170 meters (7120 feet), under Mount Kazbegi.