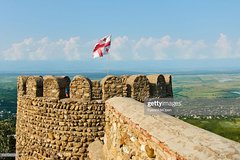 Sighnaghi is the place to take in the view of the mountains, drink homemade wine, and enjoy delicious Kakhetian food in one of the many restaurants.

Sighnaghi has undergone a fundamental reconstruction program and has become an important center of Georgia's tourist industry. While Sighnaghi itself requires just a day or so for sightseeing, it is probably the best base for exploring the region through day trips.

 place where the relics of St. Nino, evangelist of Georgia, is buried. Bodbe Monastery is built among tall Cypress trees on a steep hillside overlooking the Alazani Valley, where it opens views of the Greater Caucasus Mountains. There, 3 km from the convent you can visit St. Ninos Spring, which, according to local legend, was emerged through Ninos prayers and is believed to have a healing power

Signagi in the eastern province of Kakheti, has a reputation as Georgias city of love. Locals often compare the hilltop town to Verona, city of Romeo and Juliet, and it has everything you might need to a romantic getaway: picturesque views, old stone architecture, and a lot of wine.

Sighnaghi's economy is dominated by production of wine and traditional carpets. Signagi has recently undergone a fundamental reconstruction program and has become an important center of Georgia's tourist industry. Although for Signagi itself half day of sightseeing will be more than enough, this town is probably the best base for exploring the region on daily trips.

here we will visit Pirosmani Museum - Sighnaghi is home to the museum celebrating Georgias most famous artist, Niko Pirosmani. Afterwards we are getting to see Signagi City Walls - Sighnaghi is the only city in Georgia to have fully intact fortress walls and, even better, there are sections of the 4km structure on which you can walk. Fully restored, the fortifications date from the 18th Century and include six gate entrances and twenty-three towers in total. You can climb up several of the towers, which offer terrific views of the town itself, the green Alazani valley below and, on a clear day, the mountains in the distance. Visiting Sighnaghi Winery Pheasant's Tears Winery  you have great opportunity to taste Georgian traditional dishes and wine.