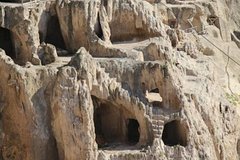 start from tbilisi historical eras: Vardzia, Rabati and Borjomi. and the cave monastery site of Vardzia. Learn about the history of the landmarks from your guide and explore the 9th century Rabati Fortress Visit the mountain town of Borjomi, known for its healing mineral waters

Start FromTbilisi Rock-hewn town of Vardzia, is situated in Aspindza, formerly the Samtskhe Province of Georgia, approximately in 70 km to the south from Borjomi city (at about 1 300m altitude). The territory of Samtskhe-Javakheti served as a barrier separating the rest of the country from the Moslem world. The place often became a theater of military operations, and was also used for the assembly and review of All-Georgian troops starting for long campaigns. Therefore, the King Giorgi III, who ruled in 1156 -1184, decided to build a town-fortress there and complete the chain of castles protecting the land - Akhalkalaki, Khertvisi, Tmogvi, and Mgeltsikhe. He decided to build it not as an ordinary fortress but as a huge fortified military quarter with a permanent large and ready-to-attack garrison.

Giorgi III did not succeed in completing the building of Vardzia.

Rabati Castle is a medieval structure in Akhaltsikhe, Georgia, which dates back to the 13th century. Originally, the fortress was called the Lomisa Castle until it was conquered by the Ottoman Empire. The Ottomans ruled the land for centuries until Russia took it due to the Treaty of Adrianople in 1829.

A mosque, a minaret, a synagogue, a Christian church, the Jakelis Palace, a museum and a citadel are the restored antique buildings, which can be seen at the renovation site. duration: 1hour

It is a resort town in south-central Georgia, in particular the Samtskhe-Javakheti region. It is located Borjomi Gorge on the eastern edge of the Borjomi-Kharagauli National Park. The town is famous for its mineral water industry (which is the number one export product of Georgia.

Borjomi mineral water is particularly well known in those countries which were part of the former Soviet Union; the bottling of mineral water is a major source of income for the area. The use of Borjomi water has been suggested by the Georgian and Russian researchers for complex treatment of several digestive diseases and diabetes mellitus, so it is a frequent destination for people with health problems. duration: 3 hour