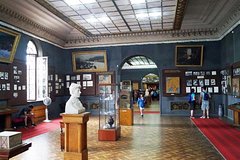 In Georgia, we have invented a time travelling device. Our team is very experienced and educated, so they know how to use this device. Unbelievable right? Book tour and you will see yourself. In eight hours you will be ported in three different eras. Your first stop will be in the 6th century and you are going to visit Jvari Monastery, near Mtskheta. Our travel in time continues and the next stop will be in the near future. You will be able to see a house, where Joseph Stalin was born, his museum and his railway carriage. The final place will be Uplistsikhe. To be a guest of this place you have to shuffle in the Early Iron Age. We will return to the 21st century, of course, and you will be dropped at your hotel to share your unforgettable emotions with your friend and family. All this time, well known, professional time traveller guide will be with you.

We will pick you up from your hotel and our trip to Mtskheta, Gori and Uplistsikhe begins.

Jvari Monastery is a sixth-century Georgian Orthodox monastery near Mtskheta in eastern Georgia. Along with other historic structures of Mtskheta, it is listed as a World Heritage site by UNESCO. Jvari Monastery stands on the rocky mountaintop at the confluence of the Mtkvari and Aragvi rivers, overlooking the town of Mtskheta, which was formerly the capital of the Kingdom of Iberia. According to traditional accounts, on this location in the early 4th century Saint Nino erected a large wooden cross on the site of a pagan temple. The present building, or Great Church of Jvari, is generally held to have been built between 590 and 605 by Erismtavari Stepanoz I.

Stop at Stalin museum in Gori

The Joseph Stalin Museum is a museum in Gori, dedicated to the life of Joseph Stalin, the leader of the Soviet Union, who was born in Gori. The Museum retains its Soviet-era characteristics. The museum has three sections, all located in the towns central square. Stalins house  Enshrined within a Greco-Italianate pavilion is a small wooden hut, in which Stalin was born in 1878 and spent his first four years. The small hut has two rooms on the ground floor. talin Museum  The main corpus of the complex is a large palazzo in Stalinist Gothic style, begun in 1951 ostensibly as a museum of the history of socialism, but clearly intended to become a memorial to Stalin, who died in 1953. Stalins railway carriage  To one side of the museum is Stalins personal railway carriage. The green Pullman carriage, which is armour plated and weighs 83 tons, was used by Stalin from 1941 onwards.

Uplistsikhe literally, the lords fortress) is an ancient rock-hewn town in eastern Georgia, some 10 kilometres east of the town of Gori, Shida Kartli.

Built on a high rocky left bank of the Mtkvari River, it contains various structures dating from the Early Iron Age to the Late Middle Ages and is notable for the unique combination of various styles of rock-cut cultures from Anatolia and Iran, as well as the co-existence of pagan and Christian architecture. Uplistsikhe is identified by archaeologists as one of the oldest urban settlements in Georgia. Strategically located in the heartland of the ancient kingdom of Kartli (or Iberia as it was known to the Classical authors), it emerged as a major political and religious centre of the country. With the Christianization of Kartli early in the 4th century, Uplistsikhe seems to have declined in its importance and lost its position to the new centres of Christian culture  Mtskheta and, later Tbilisi

After Uplistsikhe we will travel straight toTbilisi and drop you off in your hotel.