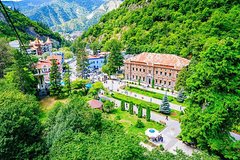 If you are travelling in Georgia dont forget to visit The most popular resort in the country, Borjomi. Our agency works for your pleasure, so we created a private tour for everybody, who is searching for new experiences and remarkable memories. During the tour, you will visit the ski resort Bakuriani. In the Summer this place is a great choice to relax, enjoy the surrounding landscapes and breath fresh air. From Bakuriani to Borjomi you will have a ride with small train Kukushka. And finally, you are going to explore well-known resort Borjomi. Here you can drink mineral water Borjomi, visit Borjomi-Kharagauli National Park and breath fresh air in Evergreen coniferous forest. Our guides are always ready to answer your questions and tell you amazing stories about these places.

We will pick you up from your hotel and our trip to Borjomi an Bakuriani begins.

Bakuriani is a daba and a skiing resort in the Borjomi district of Georgia. It is located on the northern slope of the Trialeti Range, at an elevation of 1,700 meters above sea level. The region around Bakuriani is covered by coniferous forests (mainly made up of spruce). The resort lies 30 km from Borjomi. The resort is connected with Borjomi by an electrified narrow-gauge railway. The present-day area of the town was built up by lava flows from the nearby Mukhera volcano.

The Kukushka (Russian for little cuckoo) is a 37.2-kilometre narrow-gauge railway line linking the town of Borjomi to the village and ski resort of Bakuriani.

Borjomi is a resort town in south-central Georgia It is one of the districts of the Samtskhe-Javakheti region and is situated in the northwestern part of the region in the picturesque Borjomi Gorge on the eastern edge of the Borjomi-Kharagauli National Park. The town is noted for its mineral water industry and the World Wide Fund for Nature-site Borjomi-Kharagauli National Park. Borjomi mineral water is particularly well known in those countries which were part of the former Soviet Union; the bottling of mineral water is a major source of income for the area. Because of the supposed curative powers of the areas mineral springs, it is a frequent destination for people with health problems. Borjomi is also home to the most extensive ecologically-themed amusement park in the Caucasus.

After Borjomi Park we will travel straight to Tbilisi and drop you off in your hotel.