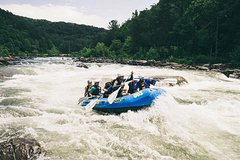 Country situated at the Meeting point of Europe and Asia, and this tour takes in the of both.

Mtskheta was founded by the ancient Meschian tribes in the 5th century BC.[4] It was capital of the early Georgian Kingdom of Iberia from the 3rd century BC to the 5th century AD. It was a site of early Christian activity resulting in Christianization of Iberia, where Christianity was proclaimed the state religion in 337. It remains the headquarters of the Georgian Orthodox Church.

stop at:Jvari Monasteryis a sixth century Georgian Orthodox monastery near Mtskheta, eastern Georgia. Along with other historic structures of Mtskheta, it is listed as a World Heritage site by UNESCO. Jvari Monastery stands on the rocky mountaintop at the confluence of the Mtkvari and Aragvi rivers . According to traditional accounts, on this location in the early 4th century Saint Nino, a female evangelist credited with converting King Mirian III of Iberia to Christianity, erected a large wooden cross on the site of a pagan temple. The cross was reportedly able to work miracles and therefore drew pilgrims from all over the Caucasus. A small church was erected over the remnants of the wooden cross in c.545 named the "Small Church of ,,Jvari"

Stop At: Tunnel Winery Khareba's, Meurneoba District Kakheti, Kvareli 383320 Georgia
The complex was founded in the 6th century by David (St. David Garejeli), one of the thirteen Assyrian monks who arrived in the country at the same time. His disciples Dodo and Luciane expanded the original lavra and founded two other monasteries known as Dodo's Rka (literally, "the horn of Dodo") and Natlismtsemeli ("the Baptist"). The monastery saw further development under the guidance of the 9th-century Georgian saint Ilarion. The convent was particularly patronized by the Georgian royal and noble families. The 12th-century Georgian king Demetre I, the author of the famous Georgian hymn Thou Art a Vineyard, even chose David Gareja as a place of his confinement after he
Duration: 3 hours

Stop At: Tunnel Winery Khareba's, Meurneoba District Kakheti, Kvareli 383320 Georgia
Taste some of the best wines in Georgia during this private visit to the Kakheti wine region from Tbilisi. Learn about the traditional Georgian way of making wines in clay vessels through visits and tastings at several wineries. UDOBNO PLACE NEAR KAKHETI SAFARI 4X4
Duration: 2 hours

Stop At: Kazbegi National Park, Georgia
The Georgian Truso Valley, the source of the Tegri River (Terek), is a spectacular place. It is famous for lush green logs, mineral springs, white-yellow-red travertines and a mineral lake with bubbles. You will also find medieval towers, especially those in the Zakagori fortress or picturesque villages such as Resi (2350 m). The Truso was inhabited by Ossetians. At the beginning of the 1990s, as part of mutual Georgian-Ossetian repressions, they were deported to Russia. The conflict between the feared nations and the closing of the border meant that the beautiful valley of Truso was forgotten.

Stop At: Signagi Municipality Administration, დავით აღმაშენებლის მოედანი N2, სიღნაღი, Georgia
As of the 1770 census, Signagi was settled by 100 families, chiefly craftsmen and merchants. When Georgia was annexed by Imperial Russia in 1801, Signagi (Signakh) was officially granted town status and became a centre of Signakh uyezd (Russian: Сигнахский уезд) within Tiflis Governorate in 1802. In 1812, Signak joined the rebellion with the rest of Kakheti against the Russian rule. During the Caucasian War, the town "was considered an important point on account of its proximity to" Dagestan.[4] STOP;AT Vashlovani NEAR Sighnaghi safari 4x4

Stop At: Signagi Municipality Administration, დავით აღმაშენებლის მოედანი N2, სიღნაღი, Georgia
The first archaeological findings from Telavi date back to the Bronze Age. One of the earliest surviving accounts of Telavi is from the 2nd century AD, by Greek geographer Claudius Ptolemaeus, who mentions the name Teleda (a reference to Telavi). Telavi began to transform into a fairly important and large political and administrative center in the 8th century.
Duration: 6 minutes

Day 6: Rafting and kayaking near Gudauri