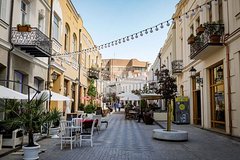 Day 1 - Meeting at the airport. Accommodation at the hotel. Free time.
Day 2 - Breakfast. Tbilisi:
Narikala Fortress- (4th c), dominates the Old Town as a most impressive architectural landmark. With its inaccessible slopes, the fortress served as a main fortification and defended the city for centuries, with an excellent view of the capital. Street Shardeni: with its fashionable and cozy cafes and art galleries.
Visit the Ethnographi Open Air Museum. The museum is located west to Turtle Lake on a hill overlooking the Vake district, Tbilisi. It is essentially a historic village populated by buildings moved there from all main territorial subdivisions of Georgia. The museum occupies 52 hectares of land. The Turtle Lake- area is designed as a recreational zone and is frequented by the Tbilisians on weekends. It is also a place where festivals and concerts are held.
Day 3 - Breakfast. A trip to the Shida Kartli region.Gori-Uplistsikhe.
The city was founded by one of the greatest kings of Georgia  David the Buider (1089-1125).
Visit to the museum of Josef Stalin in Gori  Georgia Historical Museum, dedicated to life's most famous native of the city - Joseph Stalin, who became head of the Soviet government and actually led the Soviet Union from 1925 to 1953. Goristsihe, fortress built in the middle of I millennium BC, was rebuilt in the XVII and XVIII centuries. Uplistsikhe (literally, the lord's fortress) is an ancient rock- hewn in eastern Georgia. Built on a high rocky left bank of the Mtkvari River, it contains various structures dating from the Early Iron Ages to the Late Middle Ages, and is notable for the unique combination of various styles of rock-cut cultures from Anatolia and Iran as well as the co-existence of pagan and Christian architecture.
Day 4 - Breakfast. Tbilisi:
Metheki church of Holy Virgin -Located on the left bank of the river Mtkvari , on the cliff plateau. Built in the 5th century and rebuilt in 13th century.Art Museum of Georgia. Visiting Tbilisi Botanical Garden. Located in the historical center of Tbilisi. History of Tbilisi Botanical Garden has about four hundred years. In the Botanical Gardens are widely represented Georgia and the world flora. Across the river Tsavkisistskali in the Botanical Garden spanned three bridges. Especially remarkable arched bridge over a large waterfall, built in 1914.
Day 5 - Breakfast. Mtskheta- was capital of the early Georgian Kingdom of Iberia during the 3rd century BC  5th century AD. Svetitskhoveli Cathedral- The current cathedral was built in the 11th century by the Georgian architect Arsukisdze, It is the second largest church building in the country, after the recently consecrated Tbilisi Holy Trinity Cathedral, and is listed as an UNESCO World Heritage Site along with other historical monuments of Mtskheta. Samtavro (first half of the 11th century) in honor of the Transfiguration of the Savior, the current convent. Located in Mtskheta. Built on the site of a small wooden church IV. Shio-Mgvime monastery (6th century) - The current monastery was founded by Rev. Shio, one of the thirteen Assyrian holy fathers, who arrived in Georgia in the 6th century and tried hard to preach Christianity. Jvari Monastery- is a Georgian Orthodox monastery of the 6th century near Mtskheta, Mtskheta-Mtianeti region, eastern Georgia. Time for inspection and purchase souvenirs, paintings and antiques.
Day 6 - Breakfast
Tbilisi Peace Bridge straddling the Mtkvari river that is an arresting new pedestrian bridge, courtesy of Italian architect Michel De Lucchi and French lighting director Philippe Martinaud. The structure is composed of glass and iron connecting Old Tbilisi with the new district, and boasts a 150m canopy roof of steel and glass. Time for inspection and purchase souvenirs, paintings and antiques.
Visit the funicular and observation desk with an overview of the city.
Day 7 - Breakfast. Transfer to the airport.