From kutaisi to Batumi 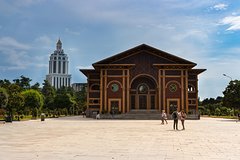 From kutaisi to Batumi

Early morning departure to the Botanical Gardens of Batumi. The garden is rich with a collection of more than five thousand kinds of living specimens including two thousand kinds of shrubs or trees. We will then leave for the Fortress of Gonio. This magnificent Roman fortress of the 1st century, remarkably preserved, contains today a splendid orangery developed by the Soviets. Here once stood a Roman city, the site still has the ruins of baths and some other buildings.According to tradition St. Matthew, one of the 12 apostles, would be buried here.Bank then the city center of Batumi. The old town, planted with magnolias and punctuated by discreet monuments and decorated with balconies and alleys with straight lines, is full of a mix of Russia, Turkey, Dubai and the village. Georgian Return in the early evening to Kutaisi (about 2h drive).

You will have all the afternoon to discover the city