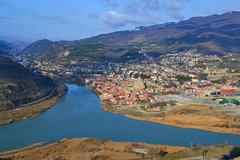 Explore all important cultural landmarks of two capitals of Georgia-Mtskheta and Tbilisi with this fascinating privately guided tour which gives you the best impression about the past and present of the country showing its authentic architecture,fabulous views and spirituality.

This educative tour is ideal for those travelers who want to see and learn more about Georgian culture,acquaint with old traditions as well as enjoy great scenery and local life

Tbilisi, Georgia isnt just a city you visit, its a city you experience. That means over-indulging in carb-loaded cuisine, accepting shots of homemade chacha, tripping over broken sidewalks in the Old Town while wondering in amazement at the barely-standing buildingsand making a visit to the Tbilisi sulphur baths.

The ancient Abanotubani District sits below the imposing fortress; the brick, domed rooftops of the baths bubbling up like the water itself. The district is the most historic part of the city, as according to legend, it was the sulphur springs that enticed King Vakhtang Georgasali to settle the land and declare it the new capital city in the 5th century AD. At the height of popularity, there were more than 60 bathhouses in Tbilisi where people could get squeaky clean or stay for a soak, letting the curing Sulphur water ease their ailments.

Named after the 17th century French trader Jean Chardin,who during his travel visited Georgia and wrote and published a book about local life and people,in past, Shardeni Street was called Dark Row. This small, narrow street was located in the old town as it is today. The street was a center of the cultural and social life. Shardeni Street was intended for trading and as it was covered with the roofs, people called it a dark row.

The site of the cathedral on Sioni Street has seen a series of buildings dating from the late fifth century.During an invasion by Arabs, this church was leveled and a new structure was built.

During the following years the cathedral suffered severe damage from foreign raiders and was restored each time. In 1112, King David IV the Builder completely re-built the church that became the basic design for the existing cathedral. During an attack by Mongols in 1226, the church was damaged again but restored anew.

The cathedral is home to two important Christian relics: cranium of Doubting Thomas and special grapevine cross which,according to tradition, was forged by St. Nino, who brought Christianity to Georgia in the fourth century.

Stop At: The Bridge of Peace, Tbilisi Georgia

The bridge of Peace a design of which reminds of a marine animal has a curvy steel and glass canopy top which shimmers with an interactive light display at night, generated by thousands of white LEDs

The bridge was designed by the Italian architect Michele De Lucchi, who had also designed the buildings of the Presidential Administration of Georgia and Ministry of Internal Affairs; the lighting design was created by French lighting designer Philippe Martinaud.

From this point we can throw the glance to Metekhi Church, Narikala Fortress and statue of city's founder Vakhtang Gorgasali

One of the most beautiful UNESCO World Heritage Sites of Georgia-VI c. Jvari monastery is a remarkable edifice of the early-medieval Georgian ecclesiastical art.According to the traditional accounts,on this location in the early 4th century Saint Nino, a female evangelist credited with converting Georgia to Christianity, erected a large wooden cross on the site of a pagan temple and then in 586-605 present-day church was built around it.From here we can enjoy spectacular views of Mtskheta and the confluence of two rivers below.

After Jvaru church visit we drive down to the townof Mtskheta dominated by the impressive cathedral called Svetitskhoveli (11th c.)- Life-Giving Pillar .According to the legend, the first church (4th c) here was built on the burial site of Christs robe. As the church was being constructed, the wooden pillar rose into the air and magic chrism started to flow from it, healing all the diseases which gave name to the church

One of the oldest Acropolises of the Antique Era ,Armaztsikhe (Armazi castle)-Bagineti was the residence of the Kings of Georgia.This place was mentioned by the Greek historian Dio Cassius as one of the areas which Roman Senator Gnaeus Pompeius invaded in 65 B.C