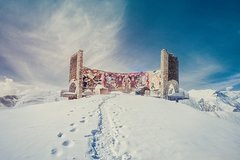 Gergwti Trinity Church is an important temple, remarkable for its beautiful scenery. The Gergeti Trinity Church is set poignantly on a hill directly below the towering white massif of Mount Kazbek, which sits at 5,033 meters. Built six hundred years ago, its stones have weathered repeated blizzards, rain and invasion to stand as a proud symbol of Georgian resilience in the face of adversity. It is the photographers perfect shot.

Zhinvali water reservoir - one of the biggest Soviet dam built in the 70's offering us beautiful views of the gorge of Aragvi river.

The RussiaGeorgia Friendship Monument or Treaty of Georgievsk Monument is a monument built in 1983 to celebrate the bicentennial of the Treaty of Georgievsk and the ongoing friendship between Soviet Georgia and Soviet Russia. Located on the Georgian Military Highway between the ski resort town of Gudauri and the Jvari pass.

The monastery was built in the XIV century in the shape of the cross-domed church. Due to its location on the top of a steep mountain, surrounded by very harsh nature, the church became the symbol of preservation of the Georgian relics: in times of wars and raids, precious and holy relics of Georgia, including the Cross of Saint Nina, were kept hidden here.

Special Offer - Book by February 29 to save 20% off our previously offered price! - Book Now!