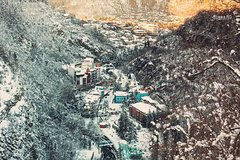 Borjomi is located in the Borjomi gorge, in the south-east of Georgia, at an altitude of 800-850 meters above sea level. This resort is surrounded by mountains, which are covered with forests. The population of the city is about 14 thousand people. According to an ancient legend, Borjomi was founded as a natural fortress, the walls of which served as the Caucasus Mountains. Guard towers were built on the slopes of the gorge to protect against the enemies, the remains of which still exist today.

Bakuriani, the oldest ski resort in the Caucasus, has a snow-recreational history since the end of the 19th century, when members of the Russian Imperial family drew attention to the scenic area not far from the famous Borjomi. The purest air of high mountains, filled with the scent of coniferous forests, breathtaking views of the sparkling peaks and gorges, all promised to become a fabulous experience for travelers from different part of the world.

World Wide Fund for Nature-site Borjomi-Kharagauli National Park. Borjomi mineral water is particularly well known in those countries which were part of the former Soviet Union; the bottling of mineral water is a major source of income for the area. Because of the supposed curative powers of the area's mineral springs, it is a frequent destination for people with health problems.

Bakuriani, the oldest ski resort in the Caucasus, has a snow-recreational history since the end of the 19th century. . Today Bakuriani is not only a center of alpine skiing, but also a recognized family resort: here you can go skating, sledding and snowmobiles, go horseback riding and explore the surroundings, good of sights even more than enough.