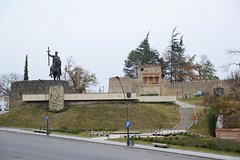 Visit capital town of Kakheti, spend day on Ilia's Lake and enjoy the sunset in the City of Love with glass of wine. Gombori pass (1990m), 800 years old Chead tree, Alazani valley, Gremi - capital of the Kingdom of Kakheti in the 16th and 17th centuries.

Bodbe Monastery - one of the most important religious sites in Georgia.

Sighnaghi - City of Love - is high on a hill, with views of the Alazani Valley and the Georgian Caucasus.
Wall - City is surrounded by a four-kilometer defensive wall with 23 towers and six gates.

Ilia's Lake - Handmade lake near town Kvareli, in the heart of Kakheti, beneath the southern slope of Great Caucasus mountains situates beautiful Ilia lake (it is called so in honor of famous Georgian writes of beginning of XX century  Ilia Chavchavadze), Around the lake are located cafes, park and cycle path. Tourists often visit the lake during Kakheti tour, to have some rest, locals come here to spend whole day near water, and rest.

Stop At: Gremi Citadel and Church of the Archangels, Gremi village, Gremi 383330 Georgia

Gremi Church - a 16th-century architectural monument  the royal citadel and the Church of the Archangels  in Kakheti.

Telavi - The Capital of Kakheti region, is home to several of the regions world-famous wineries and castles.
Statue of King Erekle - Heraclius II, also known as Erekle II and The Little Kakhetian, was a Georgian monarch of the Bagrationi dynasty, reigning as the king in XVIII century. His name is frequently transliterated in a Latinized form Heraclius because both names Erekle and Irakli are Georgian versions of this Greek name. His reign is regarded as the swan song of the Georgian monarchy.
Plane Tree - The biggest tree in Georgia (located in the city center of Telavi) is more than 900 years old as well.​

Gombori Mountain Pass - peaks at 1620 meters above sea level. Gombori road is spectacular any time of year. Small idyllic villages, magnificent sceneries of Alazani valley and Caucasus Mountains, panoramic views, sheep flocks, ancient forests, beautiful meadows and sea of clouds are just a short list of what awaits you on this road.