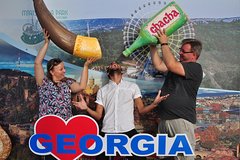 I am Beka and I offer to show you country by my car. What you should expect from my offer?! I am a local here and what you should expect from my offer is tours and trips which will be based on the local experience. This is no tour agency so no any limitation in schedule, my aim is that introduce foreigners my country from locals viewpoint, which is value for me and how tourists are say for them also ))

Sighnaghi  City of Love. It is the prettiest town in Kaheti. Sighnagi orginally was developed in the 18th century by King Erekle II. The defensive walles and 28 towers were built by him against Lezgian invasion. The city has wonderful views over the Alazani valley to the Caucasus beyond. You can taste traditional candies,with grape juice  Churchkhela and Pelamushi.
Before Signagi we visit One of the bigest wine manufacturer in Georgia,where you can taste different kind of wines. Wine Tasting - Georgia is sometimes referred to as the cradle of winemaking. And it is not a coincidence: this delightful radiant country is the oldest cultural center of viticulture, and this is evidenced by various archaeological discoveries. The history of winemaking in Georgia, according to some archaeologists, is about 8000 years old.

The Monastery of St. Nino in Bodbe - Originally was built in the 9th Century. It is one of the major pilgrimage sites in Georgia. Monastery holds the tomb of ST. Nino, the Cappadocian maiden who converted Georgian people to Chtistianity as early as 337 AD. It has a breathtaking view of the Alazani valley and snowcapped Caucasus mountains.