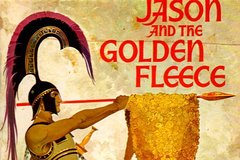 Legend has it that, in search of the Golden Fleece, Jason went to the kingdom of Kolkhida. The Argonauts were struck by the beauty and wealth of the royal palace, with its majestic towers and high fortified walls. Jason obtained the golden fleece with the help of Medea, the kings daughter. During the program, guests will visit the great kingdom of Kolkhida, and find out how the legend of the Golden Fleece is connected with reality.

Highlights
•Feel the legend of kingdom of Kolkhida
• Explore Sataplia cave with its breathtaking views, enjoy Kutaisi City view from the glass platform, see millions of years old footprints of dinosaurs and take picture with the models of dinosaurs
• Wonder through forest trails and reach hanging bridges overlooking Okatse canyon
• Listen to the noise of the Kinchkha waterfall, falling down from 80 meters, and enjoy a dramatic view of the raging stream from the viewing platform
Places to visit:
• Enjoy beauty of kingdom of Kolkhida

Cave Sataplia located on the territory of the reserve Sataplia, Imeretia. Sataplia Cave is named after Sataplia Mountain, which gained its name from the local tradition of collecting honey from the bees that inhabit the mountains southern slope. Sataplia means place of honey. Sataplia cave has a length of 900 meters, only 300 meters are accessible for visitors. The cave is illuminated with colored lamps that make stalactites and stalagmites look mysterious and attractive. The center of the cave is a large stalagmite in the form of a heart. It is believed that if you touch the heart and make a wish, it will come true. You can also walk in the woods , have views to Kutaisi thanks to glass platform overlooking the city and You can also see millions of years old footprints of dinosaurs, take picture with the models of dinosaurs, visit the small museum. There is a restaurant and some attractions. In short, tourist infrastructure is developed.

Okatse Canyon Natural Monument-located in Khoni municipality, Imereti region. This is a natural monument with recently built high quality tourist infrastructure, including stairs and footpaths offering magnificent views to the canyon and its surroundings. Kinchkha Waterfall, 30 minutes drive from Okatse, is one of the tallest in the country. You will reach it by a footpath suspended along the edge of the canyon, offering amazing views to the canyon and its surroundings. You will retain unforgettable memories after visiting this place.

Bagrati Cathedral is named after Bagrat III - the first king of a united Georgia, started at the end of the 10th century and was completed in the early years of the 11th century. The Cathedral holds special importance in the history of Georgia as an architectural and cultural monument and since 1994, Bagrati Cathedral is on the UNESCO World Heritage List. Bagrati was once richly decorated with murals and mosaics representing the masterpiece of medieval Georgian architecture. In 1692 the cathedral was captured and destroyed by the Ottomans. On the territory of Bagrati Cathedral, a large number of gold earrings, rings and other accessories had been found.