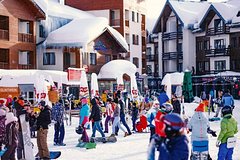 For a non-trivial way of traveling. TripsinGeo is a team of dedicated local tour experts, who all share the same passion for their job and value quality over quantity. We believe that traveling is not only about historical sights, but about personal experience and getting in contact with local traditions and lifestyle. We bring you closer to the local cultures with professional guides and drivers.

Jvari Monastery is a sixth century Georgian Orthodox monastery near Mtskheta, eastern Georgia. Along with other historic structures of Mtskheta, it is listed as a World Heritage site by UNESCO . Jvari Monastery stands on the rocky mountaintop at the confluence of the Mtkvari and Aragvi rivers, overlooking the town of Mtskheta, which was formerly the capital of the Kingdom of Iberia.

The Svetitskhoveli Cathedral is an Eastern Orthodox cathedral located in the historic town of Mtskheta, Georgia, to the northwest of the Georgian capital Tbilisi. A masterpiece of the Early Middle Ages, Svetitskhoveli is recognized by UNESCO as a World Heritage Site. It is currently the second largest church building in Georgia, after the Holy Trinity Cathedral. The original church was built in 4th century A.D. during the reign of Mirian III of Kartli (Iberia). St. Nino is said to have chosen the confluence of the Mtkvari (Kura) and Aragvi rivers as the place of the first Georgian Church.

Zhinvali, also Jinvali, is an artificial water reservoir located on the river Aragvi in Georgia. The building of the hydroelectric dam formed the Zhinvali Reservoir. The dam has been built in 1986.

In 1739, Ananuri was attacked by forces from a rival duchy, commanded by Shanshe of Ksani and was set on fire. The Aragvi clan was massacred. However, four years later, the local peasants revolted against rule by the Shamshe, killing the usurpers and inviting King Teimuraz II to rule directly over them. However, in 1746, King Teimuraz was forced to suppress another peasant uprising, with the help of King Erekle II of Kakheti. The fortress remained in use until the beginning of the 19th century. In 2007, the complex has been on the tentative list for inclusion into the UNESCO World Heritage Site program.

Gudauri is a ski resort located on the south-facing plateau of The Greater Caucasus Mountain Range in Georgia. The resort is situated in the Stepantsminda District, along the Georgian Military Highway near the Jvari Pass, at an elevation of 2,200 meters (7,200 ft.) above sea level with skiable area enjoying maximum exposure to the sun. Gudauri lies 120 km (75 mi) to the north of the capital Tbilisi and two hours drive from the Tbilisi International Airport or even a short helicopter flight from the capital. The resort offers high quality skiing opportunities. The slopes of Gudauri are completely above the tree line and are best for free-riders and are generally considered to be avalanche-safe. The ski season lasts from December to April. Heliskiing is also available throughout the season.