KAZBEGI - the soul of mountainous Georgia 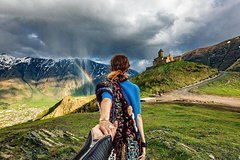 KAZBEGI - the soul of mountainous Georgia

This trip is going to take you to foothills of legendary mountain Kazbegi, the true natural treasure of Georgia. Youll truly enjoy the fabulous nature, find out about history of this road, also some lifestyle and habits existing in these mountainous areas. Well stop at most interesting and charming places of the Military Road, such as the Jinvali Reservoir, medieval walls of Ananuri, panorama from the Friendship Arch and powerful streams of Black and White Aragvi.

Our guide will meet you with our company's branded nameplate, in front of Avlabari metro station entrance at 08:50 am.

Next stop will be at Ananuri fortress complex, a former residence of Argveli Dukes. The complex features churches and towers dating back to the XII-XVIIth centuries, beautifully overlooking the Jinvali reservoir.

Ananuri fortified castle is on the UNESCO Tentative list.

Its ensemble had started from the narrow watch tower of either XIII, and a small single church of XVI, later circled by defensive walls with five massive towers and significantly strengthened by the citadel of the Upper and Lower fortresses, and crowned with the large domed cathedral of XVII.

You are able to climb up to the highest tower and explore around with our guide. For souvenir lovers there is an interesting open air market with Georgian national souvenirs and fresh juice/tea/coffee.

We continue our trip and stopping near Pasanauri Village at the confluence of two amazing mountainous rivers  the White Aragvi and the Black Aragvi.

The most amazing thing that the flows of two rivers do not mix up and look as a black-white stream. A bit lower they meet another river  Pshavskaya Aragvi of a blue-green color.

Be ready to listen a romantic local legend about these rivers. Every waterfall and river here has their own story.

The village Pasanauri is also known as homeland of "Khinkali" - Georgian national dish. We'll stop at on of the best cafes to try Pasanauri's Khinkali with other Georgian dishes and wine.

It is situated on the Georgian Military Highway between Gudauri, which is considered the best ski resort in Georgia, and the Jvari pass.

Inside the cylinder monument, a vibrantly colored mural depicts heavily stylized scenes from Georgian and Russian histories. Stone archways open up to Devils Valley and the Caucasus Mountains, and offer a breathtaking view.

The highest point on this road - The Cross (Jvari) Pass - 2395 meters above the sea. You'll taste natural sparkling water right from the source. Just make sure you have an empty bottle with you.

Our culmination is Stepantsminda, formerly Kazbegi, and XIV century Holy Trinity Temple. The latter is regarded as one of the most picturesque place of Georgia. The view opening from this temple on Stepantsminda, the Terek gorge and the snow-covered legendary Kazbegi mount will remain in your memory forever. By the way, Kazbegi is an extinct volcano where, according to the legend, Amirani, a local prototype of Prometheus, has been chained.

We will rise to an altitude of 2170 meters to Gergeti Temple on an off-road vehicle and take amazing pictures.

(Optional) We'll visit most famous hotel in Georgia - Rooms Kazbegi, where we'll have a coffee break and relax at the terrace with fantastic view. Then we go back to Tbilisi or leave you in Kazbegi if you wish.