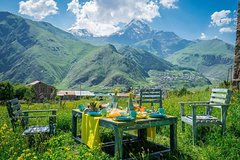 Our route goes alongside the Great Caucasus Mountain Range toward the only open Georgia - Russia border thats why its called as a great military road. Different sources describe the Georgian Military Road as 'one of the most beautiful mountain roads in the world',
This region in Georgia is popular with spectacular views and high-altitude mountains.
Snow covers the area until the early spring.

our first destination will be jinvali dam and reservoir is located 50 mins far from tbilisi. dam features breathtaking view over the mountains

after 10 mins drive, we will stop in ananuri, which is one of the prominent architectural items of late medieval Georgia. located 1 hour far from Tbilisi

The ancient church, dating from the 14th century, stands at an elevation of 2170 meters, overlooking the small town of Stephantsminda, also reffered to as Kazbegi. Apart from its religious purpose, the medieval church used to serve as a hiding place. During invasions at different times in Georgia's history the national treasure was hidden there, since it was hardly reachable for enemies.

The view from Gergeti Trinity Church: Mount Kazbegi, one of the highest mountains in Georgia.

The church has a separate bell tower and lies on the way to Mount Kazbegi, which  at the height of 5047 meters above sea level - is the third highest mountain in Georgia. During Soviet rule in Georgia, religious services were banned, but now many couples, including foreigners, ascend the mountain specifically to hold their wedding ceremonies there.