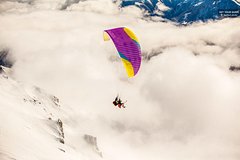 I offer people an entertaining tour where they can also partake in the process. They can work with me
to plan what kind of trip they want to have and I think it makes an already interesting adventure more
personal and exciting.

Zhinvali, also Jinvali, is an artificial water reservoir located on the river Aragvi in Georgia. The building of the hydroelectric dam formed the Zhinvali Reservoir. The dam has been built in 1986.

Ananuri castle represents multifunctional architectural complex of the late feudal times in Georgia. Built on the right bank of Aragvi River in 16th-17th cc, it was the main seat of Aragvi Eristavi - Dukes dynasty since 13th c . The village Ananuri is located on the main trade rout leading to the North, to Russia and in past it was part of the Great Silk Road. Nowadays the road is called the Georgian Military Highway. The distance from Tbilisi is 74 km (1 h) - beautiful driving along the Zhinvali water reservoir damping clean and blue mountain river of Aragvi. The castle, the bell tower, three churches and beautifully carved walls are the highlites why the site is frequently visited. The castle was the scene of numerous battles. In 1739, Ananuri was attacked by forces from a rival duchy, commanded by Shanshe of Ksani and was set on fire. The Aragvi clan was massacred. However, four years later, the local peasants revolted against rule by the Shamshe, killing the usurpers and inviting King Teimuraz II to rule directly over them. However, in 1746, King Teimuraz was forced to suppress another peasant uprising, with the help of King Erekle II of Kakheti. The fortress remained in use until the beginning of the 19th century. In 2007, the complex has been on the tentative list for inclusion into the UNESCO World Heritage Site program The fortifications consist of two castles joined by a crenellated curtain wall. The upper fortification with a large square tower, known as Sheupovari, is well preserved and is the location of the last defense of the Aragvi against the Shamshe. The lower fortification, with a round tower, is mostly in ruins. Within the complex, amongst other buildings, are two churches. The older Church of the Virgin, which abuts a tall square tower, has the graves of some of the Dukes of Aragvi. It dates from the first half of the 17th century, and was built of brick. The interior is no longer decorated, but of interest is a stone baldaquin erected by the widow of the Duke Edishera, who died in 1674. The larger Church of the Assumption (Ghvtismshobeli), built in 1689 for the son of Duke Bardzem. It is a central dome style structure with richly decorated facades, including a carved north entrance and a carved grapevine cross on the south façade. It also contains the remains of a number of frescoes, most of which were destroyed by the fire in the 18th century.

The RussiaGeorgia Friendship Monument or Treaty of Georgievsk Monument is a monument build in 1983 to celebrate the bicentennial of the Treaty of Georgievsk and ongoing friendship between Georgia and Soviet Russia. Located on the Georgian Military Highway between the ski resort town of Gudauri and the Jvari pass, the monument is a large round stone and concrete structure overlooking the Devil's Valley in the Caucasus mountains. Inside the monument is a large tile mural that spans the whole circumference of the structure and depicts scenes of Georgian and Russian history.

The old Georgian Church is located under the Mount Kazbek, 2170m above the town of Stepantsminda (former Kazbegi) and village of Gergeti whose name she had adopted. The church is widely known as Gergeti trinity Church thought Georgians call it Gergeti Tsminda Sameba. It was built in the 14th century, but not much is known to us of its history, though it was mentioned in one of the guide books from 1906, that the church was built on the place that used to be pagan idols worshiping. And in 18th century, the church turned into storage for main Georgian relics that were transported here in the time of Persian invasion to Tbilisi. In the beginning of the 20th century, Soviet government had closed the church, and it was returned back to the Georgian Orthodox Church only in the 1990s. But for the long times it had served as a popular waypoint for travelers on the road connecting Russia and Georgia. Gergeti Trinity Church is above Stepantsminda and thus it seems an impossible experience to climb up to it, but in fact ascent goes quite easy taking only an hour walk up the serpentine road and a thorny forest. Those who prefer not to walk can rent a car with a driver who will ride you up there in 10 minutes. Very often it happens that alpinists conquering the peak spend the night near the church to become acclimatized to new conditions. The architecture in the Gergeti Trinity Church is a traditional one for Georgia, although it is the only cupola church in the northern part of Georgia. A small bell tower is situated near the church, decorated with few bas-reliefs. The church itself is quite simple: only bas-reliefs and ordinary patterns decorate the massive stone blocs and the windows almost dont let any light creating mysterious twilight. Unfortunately, it is not allowed to take photographs of the church interior.