Kazbegi and Ananuri - All Inclusive Tour 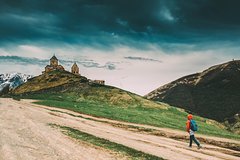 Kazbegi and Ananuri - All Inclusive Tour

Tour is offered by the professional, global Travel Company 3Line Group, which provides only ALL-INCLUSIVE and ORGANISED tours in GEORGIA and 10 more other countries.

This tour includes all activities, which helps travellers to discover Georgian traditions, beauty, hospitality, degustation of Georgian wine and Cuisine! We can make your holidays unbelievable and joyful.

Do not miss your chance and travel with 3LINE. We are happy to be your HOST!

PAY ONCE, GET EVERYTHING!

In 1739, Ananuri was attacked by forces from a rival duchy, commanded by Shanshe of Ksani and was set on fire. The Aragvi clan was massacred. However, four years later, the local peasants revolted against rule by the Shamshe, killing the usurpers and inviting King Teimuraz II to rule directly over them. However, in 1746, King Teimuraz was forced to suppress another peasant uprising, with the help of King Erekle II of Kakheti. The fortress remained in use until the beginning of the 19th century. In 2007, the complex has been on the tentative list for inclusion into the UNESCO World Heritage Site program.

Gudauri is a ski resort located on the south-facing plateau of The Greater Caucasus Mountain Range in Georgia. The resort is situated in the Stepantsminda District, along the Georgian Military Highway near the Cross Pass, at an elevation of 2,200 meters (7,200 ft.) above sea level with skiable area enjoying maximum exposure to the sun. Gudauri lies 120 km (75 mi) to the north of the capital Tbilisi and two hours drive from the Tbilisi International Airport or even a short helicopter flight from the capital.

The Gudauri Resort area and Mount Kazbek massif are excellent for Ski touring - is a great way to access nature as it was intended to be seen. The lifts provide easy access to the mountain wilderness that makes this region special.

The mineral volcanic water reservoir is located near to the village Kobi. The mountain is cover with red-brown minerals and salt. This makes it unique and attractive to tourists. Visitors can climb on the hill without any difficulties.

is a popular name for Holy Trinity Church near the village of Gergeti in Georgia. The church is situated on the right bank of the river Chkheri, at an elevation of 2170 meters (7120 feet), under Mount Kazbegi. The Gergeti Trinity Church was built in the 14th century and is the only cross-cupola church in Khevi province. The separate belltower dates from the same period as the church itself. Its isolated location on top of a steep mountain surrounded by the vastness of nature has made it a symbol for Georgia. The 18th-century Georgian author Vakhushti Batonishvili wrote that in times of danger, precious relics from Mtskheta, including Saint Nino's Cross were brought here for safekeeping. During the Soviet era, all religious services were prohibited, but the church remained a popular tourist destination. The church is now an active establishment of the Georgian Orthodox and Apostolic Church. The church is a popular waypoint for trekkers in the area and can be reached by a steep 1 1/2 hour climb up the mountain, or around 30 minutes by jeep up a rough mountain trail.

Gveleti Waterfall is a natural waterfall in wild nature, nearby to the Russian border.