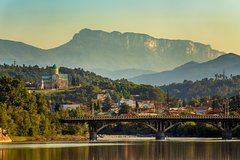 See Kutaisi's most spectacular sights on a day tour of Georgia's first capital. Visit the ancient monasteries and shelters on the hills, as well as the mysterious caves whose underground halls will impress and amaze you.

Founded in 1106 in the west of Georgia, the Monastery of Gelati is a masterpiece of the Golden Age of medieval Georgia, a period of political strength and economic growth between the 11th and 13th centuries. It is characterized by the facades of smoothly hewn large blocks, balanced proportions and blind arches for exterior decoration. The Gelati monastery, one of the largest medieval Orthodox monasteries, was also a centre of science and education and the Academy it housed was one of the most important centres of culture in ancient Georgia.

travel to Motsameta Monastery, which offers awe-inspiring views of the river and the surrounding countryside. It is named after the brothers Davit and Konstantin Mkheidze, tortured by Arabs for defending Christianity.Motsameta is a small 11th century monastery near Kutaisi. There is a 500 meters long walking track from the road to monastery. View and nature is really astonishing around. This little monastery has a spectacular setting on a cliff-top promontory above a bend of the Tskhaltsitela River.

Bagrati Cathedral was built in the early years of the 11th century, during the reign of King Bagrat III, due to which it was called "Bagrati", i.e., Bagrats cathedral. An inscription on the north wall reveals that the floor was laid in "chronicon 223", i.e., 1003. In 1692, it was devastated in an explosion by Ottoman troops who had invaded the Kingdom of Imereti. The incident caused the cupola and ceiling to collapse.

The cave was discovered and studied by Georgian speleologists in the early 80's of the 20th century. It is part of a large cave system, united by one underground river. Currently, about 30 km of the river is investigated, which is about half the length of the entire cave system. In 1985 the conversion of the cave into a sightseeing tourist destination began. By 1989, a pedestrian route was laid in the cave for about 1 kilometer, stairs and paths were built, and a 150-meter tunnel was punched out at the exit and the construction of ground-floor buildings began. The cave was equipped with temporary lighting and small groups of tourists started to visit cave.

The Natural Park Sataplia was founded in 1935 to protect recently discovered karst cave with exotic stalactites and stalagmites as well Colchian forest, geological and archaeological sites. Park was expanded to it present borders in 1957. In 2010 and 2011 the Sataplia Managed Reserve was developed to accommodate tourists: visitor center was built, a coffee house in the middle of the park, a small museum, a small park with dinosaur models and glass observation deck built above the cliff. Furthermore, the main karst cave was equipped with lighting effects and a secure footpath.Sataplia Cave is named after Sataplia Mountain, which gained its name from the local tradition of collecting honey from the bees that inhabit the mountains southern slope. Sataplia means place of honey