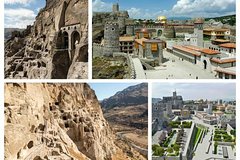 I offer people an entertaining tour where they can also partake in the process. They can work with me to plan what kind of trip they want to have and I think it makes an already interesting adventure more personal and exciting.

The unique monument of Georgian architecture, rock-hewn town of Vardzia, is situated in Aspindza, formerly the Samtskhe Province of Georgia, approximately in 70 km to the south from Borjomi city (at about 1 300m altitude). The territory of Samtskhe-Javakheti served as a barrier separating the rest of the country from the Moslem world. The place often became a theater of military operations, and was also used for the assembly and review of All-Georgian troops starting for long campaigns. Therefore, the King Giorgi III, who ruled in 1156 -1184, decided to build a town-fortress there and complete the chain of castles protecting the land - Akhalkalaki, Khertvisi, Tmogvi, and Mgeltsikhe. He decided to build it not as an ordinary fortress but as a huge fortified military quarter with a permanent large and ready-to-attack garrison. Giorgi III did not succeed in completing the building of Vardzia. The construction was brought to an end by his daughter Tamar. It is said that the name of the town derives from ak var, dzia or here I am, uncle - Tamar's call when lost in caves. During the reign of Tamar the importance of Vardzia considerably increased and achieved a great prosperity, amazing the contemporaries. Historians tell us about the Queen's rich contributions to the monastery and the luxury of its caves. The chief seminary of southwestern Georgia was housing 2 000 monks until an earthquake ruined it in 1283. Another earthquake in 1456 was followed by a Persian army in 1551, so that now Vardzia cave complex consists of approximately 600 rooms survived of a total 3 000, cut in the rock and located in five, six, seven and sometimes twelve tiers, which included stables, barracks, bakeries, wine presses and stores. Most of the rock-hewn chambers in the city were intended for residence. Each dwelling consists of three adjacent rooms, cut consecutively from the face into the depth of the rock along a south to north axis. The floors were connected by secret passages and holes made in the ceilings of the porticoes with wooden ladders attached to them. The so-called Salkhino hall with an adjoining wine cellar was intended for feasts. There was also another large wine cellar (marani) with thirteen buried jars. Total number of 28 wine cellars functioned in Vardzia: 6 in the halls and 22 in the store-rooms with 235 jars containing 90 973 liters. The existence of wine-pressers and wine cellars indicates that viticulture and wine-making played an important role in Vardzian life, especially in the 15th century. The so-called Tamar's room is located in the west part of the hall. According to a legend, Queen Tamar had 366 rooms in Vardzia so that enemies could never find out where her bedroom was. The spring is situated deep in the mountain not far from the main church. Its reservoir contains about 8 m3 (i.e. up to 200 buckets) of fresh cold water, the constant temperature 110C. However, a special water supply was built to supply the town with spring water. The water supply provided 166 000 liters per day that was enough to supply the town of 50 000 people. A tank containing 630 000 litters, was cut in the rock in the west part of the complex to store water. Vardzia is best known for the paintings of the main church. The images of King George III, Queen Tamar and Eristavi Rati Surameli are found in the Assumption temple, created by the master Giorgi in 1180. This is one of the four images of the great queen of such an ancient origin. Vardzia's paintings represent significant monument of the Georgian monumental painting.

The old stone Rabati fortress, the main sight of the Akhaltsikhe town, is standing on the small hill on the very shores of the Potskhovi river. Its name comes from Arabic meaning fortified place. It is located on the western suburbs and can be seen practically from anywhere in the city. This military building erected in the 13th century had witnessed a lot over the centuries. The fortress had been destroyed several times, was often in a siege, as a result of which had absorbed tracks of different cultures and religions. In 2012 there was held a large reconstruction after which Rabati fortress in Akhaltsikhe turned into a town within the town. It has become not only a historical monument, but a real cultural city centre. There are church, mosque, synagogue, small park, History Museum, various shops, hotels and even civil registry office inside the fortress walls.

Borjomi is a hydrothermal health spa resort in the southern region of Samskhe-Javakheti in Georgia. This picturesque valley of 10,500 residents lies within the Agura River gorge at an altitude of 800 m. Borjomi has an international reputation for its geothermal spring mineral water resources. Its accessible location in the beautiful Lesser Caucasus Mountains attracts tourists in search of nature, escape and enlightenment tourism opportunities year round.