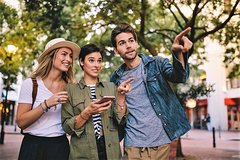 You can expect a modern city rally, where you come across tricky puzzles and interesting information about Cologne's history. Feel like Sherlock Holmes and reveal the secrets of the city. Playfully gain new insights and have fun.

On the approx. 2.5km long route you will learn interesting facts and myths, meet women who have shaped the development of Cologne, get to know the attractive places of the Rhine metropolis.

Immediately after the start you dive into a world full of hidden clues and enigmatic pictures. At the end of each task, exciting information about the respective sights awaits you.

»Only a smartphone with internet connection needed

»Suitable for individuals and groups

»Already from 6 Euro per person

The Cologne Cathedral is a Roman Catholic church in Cologne under the patronage of the Apostle Peter. It is the cathedral of the Archdiocese of Cologne and Metropolitan Church of the ecclesiastical province of Cologne.

The Cologne Cathedral is one of the largest cathedrals in Gothic style. Its construction was begun in 1248. Some art historians have called the cathedral a "perfect cathedral" because of its uniform and balanced design.

The Hohenzollern Bridge is a bridge over the Rhine in Cologne in the amount of km 688,5. Built from 1907 to 1911, the original structure consisted of two railway and one road bridge.

After 1945, the reconstruction was only for two railway bridges, which were later supplemented by a third.

The Roman-Germanic Museum of the City of Cologne (RGM) is the Office for Archaeological Bodensekmalpflege the Cologne urban area and Archaeological Museum and thus the archive of the material heritage of prehistory and the Roman and Frankish eras.

The Alter Markt is the most traditional Cologne square. He is documented for the first time since 922 as "mercatus coloniae" (Cologne market). Around 950 Cologne was extended by the Rhine suburb on the territory of the former Rheinarm island.

The company Johann Maria Farina opposite the Jülichs-Platz GmbH was founded on July 13, 1709 as G. B. Farina in Cologne and is today the oldest existing Eau de Cologne and perfume factory in the world.

Her sign is a red tulip.
The company name has long been used in French - "Jean Marie Farina vis-à-vis the place Juliers depuis 1709" - and often abbreviated as "Farina opposite".