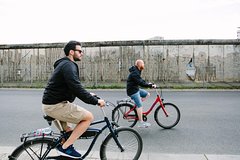 Join this extremely insightful four-hour tour, covering a leisurely 6 miles (10 kilometers) by bike. Your tour begins near Alexanderplatz where you'll area formerly known as East Berlin to visit the Wall plenty of sites that make Berlin the unique city it is today. On the Berlin Wall Bike Tour you will visit the Berlin Wall Memorial, see a former watchtower, visit the land once known as the no-man's land, see where the East German Secret Police kept their secret files, and learn about escape attempts in the places they took place.

Along the way, your guide will also tell you about ghost train stations, espionage, and world events all effected by the Wall. You'll gain insight into what life was like in the shadow of the Wall and how the city still copes with it's divided past today. Throughout the tour, your guide will be available to answer any questions you have about the Cold War and how it shaped present-day Berlin

See the Memorial of the Berlin Wall, climb to the top of the Observation Deck to get a birds-eye-view of the former Death Strip

One of the best-known public squares in Berlin the center of the East Berlin and East German Government.

See the TV tower, stop for pictures and explanation

Called the Palace of Tears because it was often the setting for emotional family goodbyes (possibly forever), as from 1962, it was used as a departure terminal for those returning to West Germany.

Get a lovely view of Berlin's main river.

Formerly the Interhotel Stadt Berlin, which was completed in 1970 (Interhotel used to be the state-owned hotel chain in East Germany). This is where Westerners would normally stay on overnight visits to East Berlin. It was modern and luxurious, but heavily monitored by the Stasi (Staatssicherheitsdienst  the East German Ministry for State Security).

See the monument dedicated to Marx and Engels

See the chapel made of compressed earth from the Death Strip on the location of Berlin's former Church of Reconciliation.

Invaliden Cemetery. Visit the former Cemetery of the Prussian Army, and discuss the Cold War propaganda on display here.

19th Century church which becomes a place where discussions that are not entirely pro-DDR start to happen. Touch on themes such as: nuclear disarmament talks, the beginning of East, German Green Movement, and even punk concerts.

A great place to end the tour with a light discussion of modern day Berlin, built in and around many East German architectural sites.

House of Teachers. Constructed in the early 1960s, this was a strategically positioned symbol facing out onto Alexanderplatz that aimed to demonstrate that the DDR was a progressive state that was more than capable of keeping up with the West. Using strong colours, expansive forms and black, angular lines, an ideal image of a peaceful, modern socialist state was created. The result was a panorama of a youthful, industrious society living in harmony and looking confidently ahead into the future. Made from over 800,000 individual tiles, the mosaic frieze (7m x 125m) is Europes largest work of art.

Fountain of Friendship Among Peoples, See iconic fountain in heart of Alexanderplatz

Stand along a former Death Strip