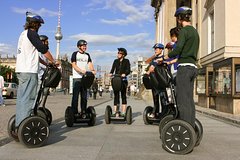 Cruise effortlessly through Berlin's parks and sidewalks as you view the sites by Segway! A self-balancing, personal transportation device that's designed to operate in any pedestrian environment, your Berlin Segway Tour is limited in size (a maximum of 8 participants per guide), so you can count on an extremely personal experience.

The most enjoyable way to orientate yourself with the city sites, Berlin Segway Tour is ideal for both new and repeat visitors. You'll soak up all the main attractions, with ample time to stop, take pictures and hear all about Berlin's unique history. Your knowledgeable native English-speaking guide will also explain present-day facts and lifestyle facts about Berlin, while being available to answer any questions you may have.

Highlights of the tour are below!

Located in no-man's land between East and West Germany during the Cold War, this famous monument, built during the 18th-century reign of Friedrich Wilhelm II, has long been a defining symbol of Berlin and both the city's division and unification.

Today, the site has been turned into a museum documenting the chronology of Nazi terror. Originally, the Prince Albrecht Hotel was on this location, which was taken over by the Gestapo (starting 1933) and SS (starting in 1939) and used as their headquarters.

Used as a commercial and military transport center before World War I, this famous town square, which was trapped in the no-man's-land next to the Berlin Wall during the Cold War, is currently under construction to become once again one of Berlin's chief commercial centers.

Situated just north of the Brandenburg Gate, this building houses the German Parliament and was the seat of the Weimar Republic government until it was seized by the Nazis in 1933.

The Berlin Wall Memorial is the central memorial site of German division, located in the middle of the capital. The memorial contains the last piece of Berlin Wall with the preserved grounds behind it and is thus able to convey an impression of how the border fortifications developed until the end of the 1980s

The site of the Nazi bookburning on May 10, 1933 now houses a memorial to that event: a below-ground room lined with empty bookcases, which you see through a window set in the pavement.

Stop At: The Holocaust Memorial - Memorial to the Murdered Jews of Europe, Cora-Berliner-Strasse 1, 10117 Berlin Germany

See the Jewish Memorial,stop for explanation and pictures, possible to walk inside

See the famous crossing point between East and West. Stop for pictures and explanation

See the site of Hitler´s bunker, where he spent the last weeks of his life and where he committed suicide.

Stop at Gendarmenmarkt, pictures and explanation

See the Houseball, an art installation/scultpture at the Bethlehem Church square

See where the Berlin Wall once ran

See the hotel balcony where Michael Jackson dangled his baby

See the faculty of Law

See the church of St. Hedwig and its Imperial architecture from outside

See the Museum Island from outside

See the Old Museum from the outside

See the reconstructed royal and imperial palace, which served mostly as the main residence of the Electors of Brandenburg, the Kings of Prussia and the German Emperors

See the Berlin Cathedral from the outside, quick stop for pictures

See the largest park in Berlin - knows as its "green lung"

Enjoy this great, open, green space as a photo spot to view the buildings of Museum Island.