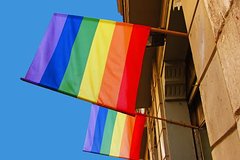 A queer king, a gay mayor, Marlene Dietrich in Blue Angel, David Bowie in the 70s, Audre Lorde in the 80s: Berlin has long been a magnet for LGBTIQ icons and allies.
From the wild days of the 1920s and the dark days of persecution under the Nazis through to the Cold War. Hear about the club scene of the 90s, the unlikely queer icon Frederick the Great, and the life of the openly gay Nazi, Ernst Röhm. Explore world-famous, Schöneberg, once the central district of the sapphic Berlin, home of philosopher and war journalist Erika Mann, chronicled by painter Otto Dix and writer Christopher Isherwood.
Discuss the queer community of Berlin and all the communities it intersects with by visiting Kreuzberg, where as far back as the 1600's, many waves of LGBTIQ and immigrant diasporas have come to determine "nobody flees without a reason".
On this tour we accept anyone that considers themselves LGBTIQ, an ally, or whos just plain interested. Everyone is welcome!

Meet your guide in central Berlin, and learn how queer culture has been an integral part of the city for centuries

A Berlin institution! A queer-run bar and restaurant that has much more to it than meets the eye.Learn how Südblock is an integral pillar of the LGBTQ+ community

Hear the history of one of the world's most famous clubs, with its roots in the 90s gay scene, to the open-all-hours madness of today

See one of Europe's oldest and most established LGBTQ neighbourhoods, and learn about the life and times of Christopher Isherwood