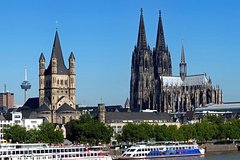 Explore the historic city of Cologne on this full-day trip from Frankfurt to enjoy a guided tour of the city. Visit the world-famous Cologne Cathedral (Kölner Dom), a UNESCO World Heritage Site. Explore the city's historic old town and enjoy free time to explore the local shops and do some independent sightseeing. Discover the city's Roman heritage at your own pace, including the beautiful Town Hall (Rathaus), and sample Koelsch, Colognes famous local beer! Then, immerse yourself in the picturesque medieval city of Limburg before returning to Frankfurt.

This morning we start from our departure offices for a ride over the highway to Cologne. The road is one of the most important traffic links between the Federal States of Hesse and North Rhine-Westphalia. Time enough to chat with your guide on German infra-structure. Although we are moving between two of Germany's strongest industrial zones, the country is green. Left and right the road are many forest areas and expansive fields.

Upon arrvial in Cologne your guide has tickets for you to go first on a doubedecker city tour. The 2000 year old city offers countless historical sights and is nowadays a vibrant comsmopolitan metropolis. The roundtrip will give you a brief overwiew: the old town with its busy breweries, pubs and restaurants, the small old market places,the traditional old houses along the river banks, churches and renowned museums (among them the Romano-Germanic Museum, with a large collection of Roman artefacts. Cologne was founded by the ancient Romans). The Ludwig Museum of Modern Art counts among the leading European galleries. Various shopping lanes offer a large variety of bargains , also in smaller local shops and boutiques.

Time for a visit of the breathtaking Gothic Cathedral, UNESCO World Heritage Site and the absolute climax of this excursion. Marvel the golden Shrine of the Three Magi and the magnificent church window of Gerhard Richter.

Afterwards, use you free time to explore the city on your own.

On our way back we will do a stopover in Limburg. The old bishop's residence is not well known among visitors from abroad. You'll be surprised by the cute and well preserved medieval center und the wonderful cathedral.
Via highway back to Frankfurt.