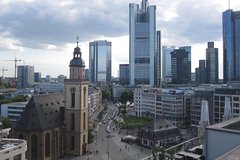 Römerberg is a beautiful square situated in Frankfurt's Old Town. It is flanked with half-timbered houses, a church, and the Town Hall. Since the 12th century, this square has played an integral role in trade fairs. Travelers came from Italy and France to attend trade fairs in Römerberg. In addition, it was the site major celebrations and festivities, such as the coronation of Holy Roman Emperors, held in the Town Hall.