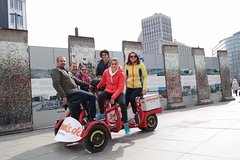 This tour with this bicycle (conference bike) is only made in Germany.

A new way to get around and see the city.

Stop At: The Holocaust Memorial - Memorial to the Murdered Jews of Europe, Cora-Berliner-Strasse 1, 10117 Berlin Germany

Explanation on the Holocaust memorial

Explanation and legends about hitler's death

Sony center, part of the oldest wall and traffic light in Europe

Explanation and stories about the Berlin Wall

They will see the point where the most significant point of the Cold War could be passed between East and West Germany.