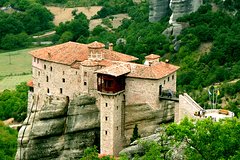 Sit back in full leather comfort in one of our new Black Mercedes E-Class, AudiA6 or Mercedes Minibus models with WiFi as you travel from Athens to explore two UNESCO World Heritage sites on this private, 3-day tour.

Visit Delphi on the beautiful slopes of Mount Parnassus, a major center of worship in the ancient world. Marvel at the Meteora Monasteries, set on top of a series of majestic rock pillars that reach up to 1,312ft. (400m) high. Stop at the Battle of Thermopylae site and the Visitors Center with its 3D-recreation of the Battle of the 300. With comfortable stays at a 4-star hotel in Delphi and a boutique hotel in Kalambaka our flexible 'go at your own pace' tour is a great option for families, couples, small groups & all ages.

After pickup at your hotel, cruise ship or Airport by your private & informative tour driver, sit back & relax in one of our new Black Mercedes E Class or AudiA6 models with full leather & Wifi as you head north passing through beautiful countryside before arriving at the Delphi archaeological site. You take all the time you need to tour the Castalian Spring, ancient sanctuary of Apollo, the treasury of the Athenians, the ancient stadium, ancient theater and impressive museum with its many artifacts from as far back as the 15th century BC, including highlights such as the Naxian Sphinx, statue of Antinoos and the bronze sculpture of a charioteer. After ample time to enjoy the site and reflect on its significance, you'll then visit the pretty mountain village of Arachova perched at 3,116 feet (950 meters) on the south slopes of Mount Parnassus. Here you'll take the opportunity to stop for lunch with some wonderful Greek cuisine and many regional specialties before a walk to explore the village enjoying its atmosphere, views and local craft shops before settling in to your nearby 4 star Hotel in the center of Delphi.

After breakfast you'll travel toward the Aegean coast, pausing on the way at one of the charming seaside villages before reaching Meteora where you ascend to visit two of the monasteries. Built on a natural formation of sandstone rock pillars up to 1,312 feet high, the six remaining monasteries date from the 14th century and form a remarkable and awe-inspiring combination of nature and spiritual significance. You'll visit two of the most outstanding monasteries, normally the Grand Meteora Monastery, Varlaam or Agiou Stefanou, and learn about their long history and the hermits and monks that lived there. Here, you'll take in the majestic landscape views. After taking the time you need, descend to the town of Kalambaka at the base of the rocks with its extensive choice of local cuisine. Travel to your boutique hotel accommodation.

After a leisurely breakfast, travel south for approximately 90 minutes to the site of Thermopylae, stopping to see the monument and enter the newly built Visitors Center, which recreates the ancient battle where King Leonidas led the 300 Spartans in 480 BC. After pausing for lunch by the sea in one of the many local villages we finally continue to return you to your hotel in Athens with the memories and images from these wonderful experiences.

Our English-speaking driver will provide individual attention during your trip and relate many interesting details to help you make the most of the places visited. Your driver can not enter the archeological sites, but we cooperate with a selected number of licensed guides at each site visited and which can be included on request