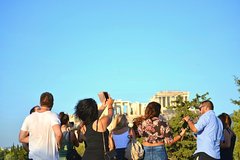 This activity will help you learn more about the ancient Greek culture. Have fun, take pictures and learn history, by participating in an activity based on ancient Greek fighting techniques.
Our tour program:
• Prison of Socrates: One of the most important philosophers of all time is Sokrates who was born in 469 BC.
• The Pnyx: This hill was used for popular assemblies in Athens as early as 507 BC, when the reforms of Cleisthenes transferred political power to the citizenry.
• The Philopappos Monument: is an ancient Greek mausoleum and monument on the top of the hill.
• Hill of the muses: the Muses (Ancient Greek: Μοῦσαι, Moũsai) are the inspirational goddesses of literature, science, and the arts, this hill carry their name and has a panoramic view of Athens and Acropolis.
• Main experience: Lesson of the ancient art of Phalanx, interact as a Greek hoplite (warrior), be amused and learn history of the ancient Greek culture.

We will start our exploration, by walking to the hill of Philopappos and share some history facts about ancient Athens and Greece through times. We'll stop at the famous "Socrates's prison", then at the "Pnyx", where the great political struggles of Athens during the Golden Age were fought out. Next well head to the Hill of the Musses and finally arrive at the top of the hill where the ancient Greek mausoleum: "Monument of Philopappos" is lying.

Along the way, youll have the chance to shoot really beautiful photos of the surroundings, the Parthenon, the temple of Athena and enjoy a great view of the whole city of Athens. Finally, we'll explore the hidden art of the ancient greek phalanx during the persian wars (500-448bce), the strategy, the equipment, the movement of every Greek hoplite that made him a unique soldier through the ages.

The Spartan king Leonidas and his brave 300 soldiers, the clever and cunning Athenian Politician and general Miltiades used this fighting style and managed to defend the Greek cities and the Western civilization against the Great Persian invasion.