Athens Half Day Private Tour With An Escort- 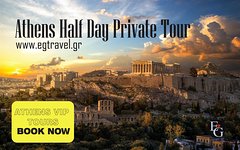 Athens Half Day Private Tour With An Escort-

We provide non-smoking Sedan  Mini Vans  Mini Bus vehicles, Mercedes Benz Full air conditioned. All vehicles are covered by a fully comprehensive insurance policy and licensed by the Greek National Tourism Organization. This program includes an escort who accompany travelers during the ride.

The Acropolis of Athens is an ancient citadel located on a rocky outcrop above the city of Athens and contains the remains of several ancient buildings of great architectural and historic significance, the most famous being the Parthenon. The word acropolis is from the Greek words akron, highest point and πόλις - city

The Temple of Olympian Zeus also known as the Olympieion or Columns of the Olympian Zeus, is a former colossal temple at the center of the Greek capital Athens. It was dedicated to "Olympian" Zeus.

The Panathenaic Stadium or Kallimarmaro is a multi-purpose stadium in Athens, Greece. One of the main historic attractions of Athens, it is the only stadium in the world built entirely of marble.

The National Garden is a public park of 15.5 hectares (38 acres) in the center of the Greek capital, Athens. It is located between the districts of Kolonaki and Pangrati, directly behind the Greek Parliament building (The Old Palace).

Pass By: Changing of the Guard Ceremony, Tomb of the Unknown Soldier, Athens 10557 Greece

Changing of the Guard is just in front of the old palace. Today the building is Parliament House.

One of the most historical streets of Athens, to see numerous 19th century neoclassical buildings.

Pass By: The Academy of Athens, 28 Panepistimiou Avenue, Athens 106 79 Greece

The first part of Trilogy in Panepistimiou street.

The second part of the Trilogy on the historical Panepistimiou street.

The third part of the historical Trilogy on Panepistimiou street.

Special Offer - Book by January 31 to save 40% off our previously offered price! - Book Now!