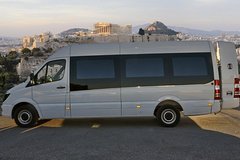 Visiting Athens is a unique experience,so you can join us and you will have the chance to discover our history,civilization and beauty of our wonderful city.This tour gives you an opportunity to observe the striking contrasts that make Athens such a fascinating city.

First of all the duration of this tour is 4-5 hours. You can see the most important monuments of Athens.

You have the chance to admire the magnificent panorama of the city from Lycabetus hill at 745 ft. (277 m). Lycabettus stands high above Athens, commanding a clear view across the Attica basin and the Aegean. Facing the viewing platform is Agios Georgios, the tiny white chapel of St. George

UNESCO calls it the symbol of World Heritage.It s the symbol of democracy and Greek civilization. Its the site of four of the greatest masterpieces of classical Greek art  the Parthenon (former temple on the Athenian Acropolis, Greece, dedicated to the goddess Athena) , the Propylaea (the monumental gateway to the Acropolis), the Erechtheum (is an ancient Greek temple on the north side of the Acropolis of Athens  which was dedicated to both Athena and Poseidon) and the Temple of Athena Nike

You will see the shift change of the guards (evzones) in front of the Greek parliament and the memorial of the Unknown soldier.

You will visit the trilogy of our culture (the Academy of Athens, the University and the National Library.

You will admire the Temple of Olympian Zeus

You will admire the Hadrians Arch

The only stadium in the world built entirely of marble. The Stadium hosted the first modern Olympic Games in 1896

You will have free time in the ancient neighbourhood of Athens close to Acropolis,named Plaka. Plaka is full of people,music ,typical restaurants tavernas, beautiful houses,cosy cafes and littleshops with souvenirs