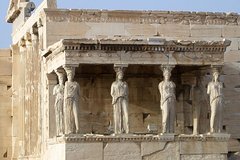 This tour covers all the major sights of Athens plus the Athenian riviera and the famous Poseidon Temple at Cape of Sounion.
This tour has a personilize character.
The driver will try to face all your needs during the tour.
You may easily customize the suggested itinerary in accordance to your wish.
The car will be only for you.

Our private tour starts with the visit of the naturally fortified hill of the Acropolis, the cornerstone of Athens existence. You will travel back in ancient times walking among the Propylaea, the Temple of Athena Nike, the unique Parthenon & the Erechteion. From the top, you will have a panoramic view of the ancient theater of Dionisos & of the Herodion (Odeion of Herodes Atticus).

Our private tour continues with the Olympeion. You will visit the Temple of Zeus and the Hadrians Arch.

Next stop is the famous Panathenaic Stadium (also known as Kallimarmaron) where the first modern Olympic Games were revived on 1896.

Next attraction is the Presidential Mansion (ex-Royal Palace) where you will monitor the traditional Change of the Guard.

Our car will then climb you to St. George Lycabettus Hill with the best panoramic view of Athens (ideal place for taking photos).

Our next stop is at the Ancient Agora. You will visit the Hellenic Agora (Aeropagus) & the Roman Agora

Our last attraction in Athens is the famous Plaka. You will be lost in the narrow streets where the spirit of old Athens exists. You shall have the time to make shopping or to enjoy a refresment in a lovely cafe.

Second part of our tour and we continue with the crossing of the Athens golden coastal road, named Poseidonos Av. Passing via marvelous coastal places/villages such as Alimos, Glyfada & Voula, we reach to the luxurious place of Laimos of Vouliagmeni where you shall have the opportunity to admire a marvelous beach and to take photos with the background of the Saronic Gulf.

The tour continues with driving via Varkiza (passing through an old rocky tunnel), Saronida, Fokaia (traditional fishing village) until the southern end of Attika named Cape of Sounion. You will visit the ruins in the archaeological area where the Temple of Poseidon (God of the Sea) dominates. The place allows you to admire the deep blue of the Aegean sea and to take unique photos. Our private tour concludes with the return to the starting point in Athens.