Athens city 4hrs tour and drop-off to the Airport 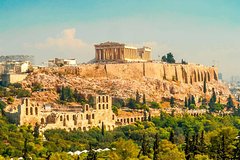 Athens city 4hrs tour and drop-off to the Airport

Experience our high-quality Athens city tour.
Book your taxi among our modern fleet.
What makes us to stand out:
-We quarantee:
• Safe, easy, hassle-free transfer
• High-quality services
-We offer:
-Pick up from a professional, licenced, reliable, english-speaking driver
-Assistance for any concerns about your stay with the eye of a localler.
-Air-conditioned cars
-Free wifi on board
-We can provide, upon request, the baby seat that is suitable for your childs age.
The specific tour is an ideal option for travellers who don't have enough time to spend in Athens, so they will be able to visit the most significant places in Athens.
Let us be the wonderful start of your unique experience in Greece.

You will visit the Sacred Rock of Acropolis and you'll see the most important ancient site in western world and a universal symbol of the classical spirit. Admire Parthenon, the symbol of democracy, Erechtheum with its "Porch of Maidens" known as Caryatids, Propylae, the grand entrance to Acropolis, Temple of Athena Nike.

The old historical neighborhood of Athens it's known for its picturesque alleyways and its neoclassical architecture.

The area of Monastiraki is full of life all day and night long. There are a lot of restaurants to eat but also a lot of places to enjoy coffee or beverages, looking up to Acropolis, the best view worldwide-with no exaggeration.

Lycabettus hill is located in the center of Athens, is standing 277 metres above sea level and it's the highest point of Athens.
You will enjoy the breathtaking panoramic view of the city!

It's the only stadium built entirely of marble in the whole world. It was built in 330BC. It's the finishing point for the annual Athens Classical Marathon. The Panathenaic Stadium hosted the First Modern Olympic Games in 1896 and until now hosts the Olympic Flame handover ceremony

The old Parliament House was founded by Queen Amalia in 1858 and housed the Parliament of Greece between 1875-1932. Today it houses the National Historical Museum

The arch was constructed in 131 bc to honor the Roman Emperor Handrian. It was marking the boundary between the old ancient city of Athens and the new city.

The temple was dedicated to Olympian Zeus and it was one of the most famous marbled buildings in the world. There were 104 Corinthian columns of which only 15 remail standing. Ine of those blew down in 1852 because of a storm. Inside the temple was a giant gold and ivory statue of Zeus.

Completing the tour, you will be transferred to Athens International Airport to depart from Athens